Battle of ideologies, a struggle steeped in history: Decoding DMK vs Governor row over Thamizhagam 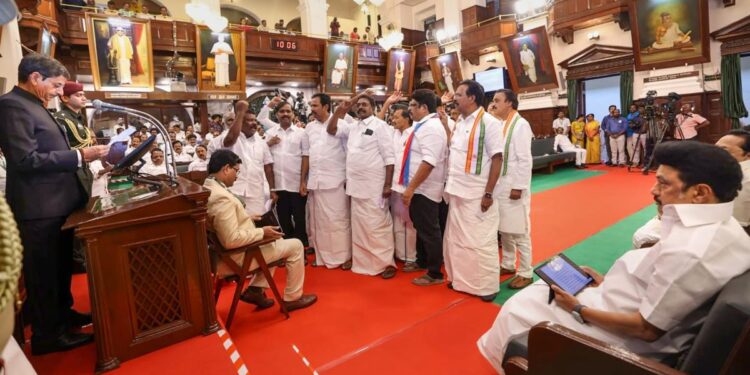 
By AR Meyyammai: When the Tamil Nadu Governor RN Ravi made a remark that he preferred ‘Thamizhagam’ (Home of Tamils) to `Tamil Nadu’ (Tamil country) for the name of the state, at a function in Raj Bhavan recently, he knew very well that it would ignite an explosive row in a State that prides in its ancient language and exclusive identity.

The Governor, since he moved into Raj Bhavan in Chennai a year ago, has been courting a series of controversies, which his critics call “undesirable and divisive”.

His ‘aversion’ to Dravidian ideology and fondness for Sanadhana Dharma have rendered him the most controversial constitutional head Tamil Nadu has ever witnessed.

This confronting attitude against the DMK-led government, not only on the administrative domain (more than 10 Bills have been pending with him for months now) but also on the ideological plain, has started straining the very operational efficiency of two constitutionally empowered entities of a secular democracy.

TN Governors then and now: The difference

It is not new for Tamil Nadu Governors to get embroiled in rows, especially with the democratically elected governments. Former Chief Minister and AIADMK leader J Jayalalithaa broke the mandated obligation of inviting a Governor to inaugurate an Assembly session when she was in power. The same leader once accused a Governor of having `misbehaved’ with her. Besides, both Dravidian majors – the DMK and the AIADMK- had organised various protests and agitations against them for various issues on many occasions.

But Ravi, unlike his predecessors, is different. Accused of being a ‘BJP sympathiser’, he, however, has been avoiding direct confrontation, though he never hesitates to betray his displeasure over the ‘Dravidian Model’ the Chief Minister MK Stalin has been proudly professing.

For Ravi, the Dravidian ideology sounds sectarian. Hence, he presumes that Tamil Nadu has fallen way behind the nationalistic mainstream, which, according to him, jeopardises the state’s overall development. According to his detractors, what he forgets is that Tamil Nadu has progressed in many spheres, in fact, way ahead of those states in the North from where Ravi too hails, because of this Dravidian ideology with inclusive welfare as primary motto.

Current row in the Assembly

This has led to an unsavoury incident on Jan 9 when he opened the Tamil Nadu Assembly session for the new year. In his address, he skipped the references to Dravidian movement and the names of nation’s tall leaders like Dr BR Ambedkar and social reformer Periyar E V Ramasamy. It was a government-prepared text that was approved prior by him as per the Assembly protocols. Treasury benches and other political parties vehemently accused him of `deliberate omissions.’ Chief Minister Stalin moved a resolution, an unprecedented one in the annals of Tamil Nadu history, condemning the Governor for his `wanton’ omissions. Ravi walked out of the Assembly Hall in a huff.

Tamils and Tamil Nadu have always been sensitive to their language and race. The constant attack on both by the right wingers from within and outside the state has put the politics on the boil now.

ALSO READ | Why Governor versus state battle is raging in Tamil Nadu, Kerala and Telangana

Tempers from both sides have been running high. In fact, understanding the very idea of Tamil nationalism in Dravidian Land is a complex issue. Tamil nationalism is linked to the ancient language and culture while Dravidianism is associated with social reforms, self-respect movement and anti-Brahminism, which Periyar and the Justice Party propagated, and which the state has been witnessing for almost a century now.

Battle of ideologies, not alliances

These factors are still defining Tamil Nadu politics today. The Hindi agitation in 1930s and later in 1960s rewrote the linguistic exclusiveness of the state and race that stubbornly remain averse to any alien influences on its cultural and political domains. When the BJP, which has been struggling to break ground here, comes with the baggage of right wing majoritarianism, its leaders and also the Governor are still unable to comprehend the intricate matrix of the language and the Dravidian ideology that weaves into Tamil politics. It is now heading to a battle of ideologies and not of alliances. Thus the present controversy between Ravi and the DMK government has to be viewed from this context. Ravi’s remarks on Tamil Nadu also has to be read from this perspective.

He said that he preferred the word `Thamizhagam,’ instead of `Tamil Nadu,’ thus construing that the latter word means `country.’ Hence, a stern believer in `One Nation, One language’ theory advocated by the BJP, the name irritates him. He said that Dravidian narratives were propagated by vested elements, which kept Tamil Nadu away from the mainstream. He called these jargons false and fictional. The very concept of an autonomous state in a Union of States disturbs him.

A struggle steeped in history

In fact, what he seems to have missed out about the state’s political evolution was the struggles that had shaped it, including the long struggle that took place for more than a decade from 1950s to get the state renamed as `Tamil Nadu’. On August 15, 1947, when the country became independent, the Madras state comprised territorial areas of today’s Tamil Nadu, Andhra Pradesh and Kerala. But after the reorganisation of the states, the call to rename the state as Tamil Nadu gained momentum.

Periyar used to mention the word `Tamil Nadu’ in his writings from the early 1930s. He strongly advocated that the state be named Tamil Nadu though he was not averse to the word Thamizhagam, which Ravi used. The issue was taken up by Tamil writer Ma. Po. Sivagnanam who, however, stressed that Madras had to be renamed as `Tamil Nadu’ in 1953. But the demand gained traction when Tamil scholar and a Congress veteran K.P. Sankaralinganar, demanding the renaming, went on a fast-unto-death protest from July 27, 1956. Ironically a Congress government was in power then. But the fast led to his death on October 13, 1956.

His death became the rallying point for all political and non-political organisations, which urged both central and state governments to rename the Madras state as Tamil Nadu. Despite vociferous demands, the ruling Congress stubbornly refused to endorse it when a resolution to this effect was tabled before the Madras Legislative Assembly in 1961. There were just 42 votes in favour of the resolution.

But senior Communist leader and Member of Parliament Bhupesh Gupta from West Bengal, moved a Bill in Parliament in 1963, for renaming Madras State as Tamil Nadu. The DMK leader, also a Rajya Sabha member then, C.N. Annadurai, while participating in a debate on the issue, insisted that a state could not be identified after the name of its capital, Madras then.

Confronted by a member who asked him on what was there in a name, Annadurai retorted what he had gained from renaming Parliament as Lok Sabha. He told the House that the name Tamil Nadu connected emotionally and culturally with the Tamils. He wondered what the members who opposed it would lose upon name change.

When the name change became a reality

Later, after becoming the Chief Minister, Annadurai tabled the Bill in the State Legislative Assembly on July 18, 1967 seeking to rename the state as Tamil Nadu. The resolution was passed unanimously. The Congress, which opposed the move when in power, welcomed this time. Annadurai, while addressing the Assembly, said that the name `Tamil Nadu’ did not mean a separate country. “It will remain a part of the Indian Union,” he pointed out.

As the renaming required a Constitutional amendment, the Lok Sabha on November 22, 1968 and the Rajya Sabha in December the same year passed it unanimously. On January 14, 1969, Annadurai announced the change of the name as Tamil Nadu. To remember the day, the present DMK government has announced that July 18 would be observed as Tamil Nadu Day.

In fact, many references to Tamil Nadu could be seen in ancient Tamil literature. Even poet Subramania Bharati wrote a poem on the state: “Senthamizh nadennum pothinilae, Inba thaen vanthu payuthu kaathinilae” (When you just mention classical Tamil Nadu, nectar flows into ears).

The politics in the Dravidian land, with Tamil nationalism rooted in language and culture, has been a heady mixture that defies majoritarian ideology. It will remain so in future too despite radical shifts in socio-economic and cultural narratives.