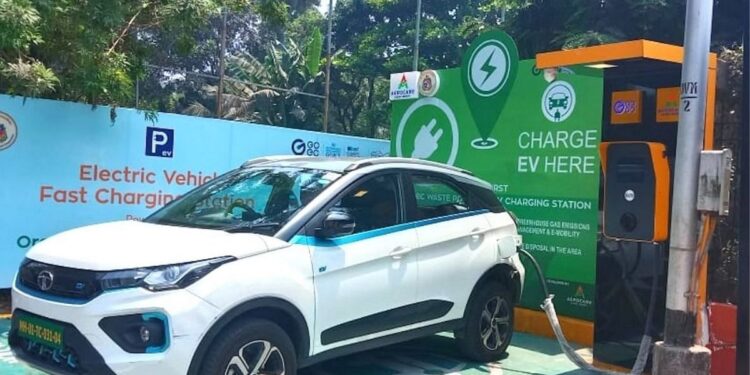 
This article has been sponsored by Wingify Earth

Even though switching to electric vehicles is a sustainable step to contribute towards a greener future, it is also important to ensure that the electricity for running these vehicles also comes from eco-friendly sources.

GPS Renewables — a Bengaluru-based ‘green innovation company’ has come up with one such source which is not solar power. With support from the Biotechnology Industry Research Assistance Council (BIRAC) and Aerocare Clean Energy, the company set up an EV charging station at Haji Ali, Mumbai that uses biogas to generate electricity.

The company is a brainchild of IIM graduates — Mainak Chakraborty and Sreekrishna Sankar and was founded in 2012. Biogas is generated from the biomethane plant placed alongside the charging station.

“In our EV charging station, the diesel/petrol is replaced by biogas — a green fuel alternative. Purified biogas is fed into a genset designed to use biogas as fuel, which in turn produces current. This renewable power then becomes the input to the charging station, which supplies renewable energy to charge the electric vehicles,” says Rajesh Ayappassur, the director of Business Development and Partnerships at GPS Renewables.

He continues, “When at 100 per cent capacity utilisation, this particular plant produces nearly 240 cubic metres of biogas in a day which can be used to power eight cars completely.”

The biogas plant in Haji Ali has the capacity to use two tonnes of organic waste per day. On a daily basis, it would need between one and two tonnes of wet waste to remain operational.

“The inspiration behind this initiative is to establish an infrastructure that is 100 per cent green and in turn drive large-scale adoption of sustainable behaviour. Therefore, with the motive of making EV an end-to-end green model, GPS decided to commission this prototype of a charging station,” shares Rajesh.

While usual EV charging stations take an average of four hours to fully charge a car, the GPS company’s station needs just 45 minutes. In order to ensure the optimum operation of the plant, around two to three operators are required, end-to-end. “We envision future automation so as to completely remove manual dependency,” says Rajesh.

As on May 2022, the price of charging an EV at this particular biogas-powered charging station was Rs 15 per kWh (unit), not inclusive of GST. “We are now on a mission to replicate this model across EV charging stations in the country,” adds the founder.

About the limitations faced in setting up the plant, the founder says, “The biogas plant can be utilised to its full capacity and thereby, be used to charge maximum vehicles only when there is a good amount of input feedstock in the form of wet waste. Initially, setting up sources was a bit of a challenge, but now we have sufficient partners to supply the organic waste,” says Rajesh.

The input produce for this biomethanation plant is sourced from nearby establishments including hotels, motels, restaurants and small eateries. The organic wet waste discarded by them goes as feedstock into the plant. They are transported to the plant through green waste collector trucks appointed by the Municipal Corporation of Greater Mumbai (MCGM).

The company has more than 100 biogas plants established and operational across India today. They are also incubating a project to transform the compostable fraction of MSW (Municipal Solid Waste) into BioCNG.

“Be it in technology or in process, we are constantly innovating in the field of renewable energy using biofuels, spearheaded by a decorated group of scientists, engineers and leaders. This will continue in the upcoming years,” Rajesh concludes.

US West Coast aligns to ban new gas cars by 2035