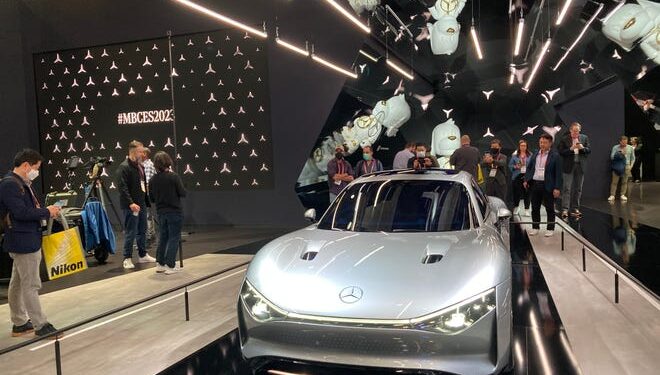 Improvements to autonomous driving, color-changing exteriors and flying cars are just a few examples of the futuristic vehicle tech unveiled at this year’s CES trade show, which wraps up this Sunday.

Major automakers like BMW, Mercedes-Benz and Stellantis (the parent company of Ram, Jeep, Chrysler and other brands) gathered in Las Vegas this week to showcase their latest tech and tease what’s to come.

The tech show isn’t over yet, but here are some of the most exciting developments the auto industry showcased at CES 2023.

After revealing last year a concept car featuring E Ink that can change colors with the push of a button, BMW followed up with more color-changing technology at CES 2023.

Whereas last year’s car was limited to shifting between black and white, the concept car unveiled this year – the i Vision Dee – is the first full-color version with E Ink technology and can display up to 32 colors, according to BMW.

Another German automaker, Volkswagen, showcased the ID.7, an electric sedan fitted with “smart camouflage” that creates light effects through 40 layers of paint. When connected to a sound system, there are 22 areas of the concept vehicle that can light up individually to visualize the rhythm.

Amazon rolls out Ring Car Cam:This is what to know about it — and when you can buy one.

Mercedes-Benz on Thursday announced that it would soon offer an advanced autonomous driving system in select states.

The Nevada DMV approved the automaker’s application to deploy Level 3 autonomous driving and is expected to issue a certificate of compliance within the next two weeks, according to Mercedes-Benz.

Level 3 allows customers to take their eyes completely off the road under certain conditions, which means they can “focus on certain secondary activities such as communicating with colleagues via In-Car Office, browsing the web or relaxing while watching a movie,” Mercedes-Benz said in a release.

The feature will be available in the S-Class and EQS starting with model year 2024 and can be used in high-density traffic and other “suitable motorway sections” where the vehicle is traveling under 40 miles per hour.

Mercedes-Benz is optimistic approval from the state of California will come “soon” but offered no specific timeline.

Video games, VR inside your car

Gaming and AI company Nvidia announced Tuesday that its cloud gaming service, GeForce NOW, will soon be available in cars from automakers Hyundai Motor Group, BYD and Polestar. The vehicles will be able to stream real-time PC games for passengers in the back and, if parked, front-seat occupants.

The service offers more than 1,000 titles, including The Witcher 3: Wild Hunt and free-to-play games like Fortnite.

Meanwhile, the startup Holoride announced the release of a smart speaker-sized device that can equip any vehicle to handle its virtual reality system. The $799 pack includes a Holoride retrofit device that can suction cup to a windshield, a headset, a safety strap and a one-year subscription to the Holoride platform.

California-based startup Aska revealed the first fully-functional prototype of its A5, a four-seat electric vehicle that can travel by road and up to 250 miles by air. The vehicle is available for pre-order and is targeted for commercialization in 2026.

If you don’t have $789,000 lying around to purchase your own A5, Aska plans to launch a ride-sharing service with its vehicles in 2026.

Electric vehicles were a common theme among automakers at CES.

Mercedes-Benz also announced during CES plans to launch a high-power charging network, starting in North America this year. The company plans to set up more than 10,000 high-power chargers worldwide by the end of the decade.

Mercedes-Benz customers will be able to reserve charging stations, but the network will be open to all car brands with compatible technology.

You can follow USA TODAY reporter Bailey Schulz on Twitter @bailey_schulz and subscribe to our free Daily Money newsletter here for personal finance tips and business news every Monday through Friday.