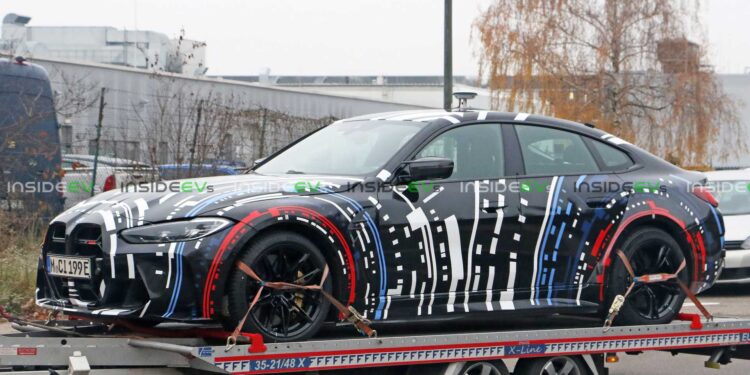 
BMW is working on a quad-motor electric powertrain that will power future M-badged EVs. The automaker has officially confirmed this, and even showed us a prototype, but not much actual information was presented.

When asked how BMW plans to keep some of today’s gas-burning M car character and imbue it into future electric models, van Meel pointed to an idea it’s already implemented in existing models. He explained “the secret behind that is that you have a central controller, or a central logic that controls everything: the rear differential but also the front-to-rear differential and the DCS system.”

He is referring to the car’s dynamic stability control system that actually centralizes information from other auxiliary systems in order to make the vehicle behave cohesively. He goes on to say that “if you have four systems that try to co-operate, the car drives like a car with four systems that like to co-operate.”

The outlet notes that BMW apparently internally calls its advanced powertrain computer (which it first used in the i8) the ‘Hand of God’ whose task is to balance power delivery between a performance hybrid vehicle’s gas engine and electric motor. Presumably its name comes from the constant surge of power that it can provide, although the source article doesn’t elaborate more on why it was chosen.

Van Meel noted that this type of advanced ECU will be critical in trying to make an electric M car feel exciting enough. “If you go a step further and look at electric cars with four electric motors, like we have in our very early development car, then of course you can still use the same logic to control the car that drives like an M,” he said, “so I’d say it gives you even more possibilities.”

He also talked about BMW M’s desire to offer electric models in many sizes, styles and price ranges. For instance, he confirmed that there will be a two-door electric M model similar to today’s M2, and that is should cost about the same. It would be the entry point into the M range and cost from around $70,000.

No clear timeline for when the first electric M will debut was mentioned, though. However, in the future we should not expect M models to be a spiced up version of an existing vehicle – as the recently released XM model suggests, M wants to launch bespoke models with unique bodies not shared with any other BMWs.