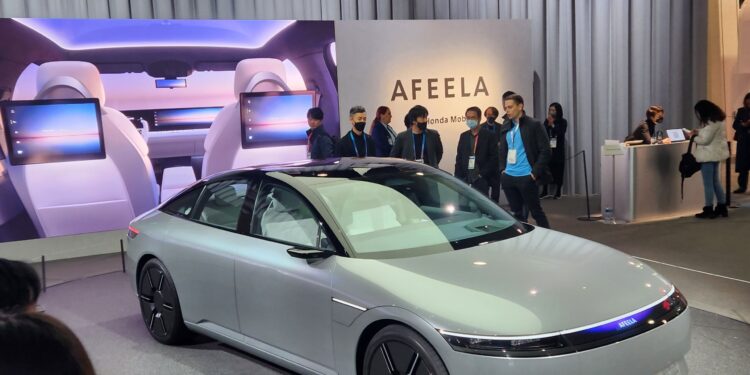 With the Biden administration’s recent announcement of an expected March increase from the present $7,500 incentive for consumers who purchase an electric vehicle, there will soon be an additional financial benefit for buyers. To that end, there is no shortage of options.

If one were to stroll through the West Hall of the Las Vegas Convention Center, the venue that housed the Consumer Electronics Show’s behemoth automotive exhibition over the past few days, you’d be excused for thinking that all vehicles presently in circulation are electric.

After all, pretty much everything from the next generation of motorcycles to a soon-to-be unveiled U.S. Postal Service delivery van, is now battery-powered.

While the state of the world on our nation’s streets is a far different scenario, the reality is that slowly, but surely, we’re headed in that direction.

With the Biden administration’s recent announcement of an expected March increase from the present $7,500 incentive for consumers who purchase an electric vehicle, there will soon be an additional financial benefit for buyers. To that end, there is no shortage of options.

At CES, Mercedes-Benz, Volkswagen, BMW, Audi, Stellantis (parent company of Chrysler, Peugeot, Vauxhall and Fiat) and Volvo all unveiled their versions of EVs that are either presently in the market or slated for delivery later this year, with a few concept vehicles – forever a staple of auto shows – soon to emerge from their respective drawing boards.

Finland-based motorcycle manufacturer Verge introduced its 201 HP all-electric superbike, widely rumored to be the fastest, most-powerful two-wheeled vehicle ever produced, while Oshkosh Defense is producing 60,000 new zero emission delivery vehicles for the U.S. Postal Service — 75% of which will be fully electric — slated for 2026.

Dodge most definitely turned heads with the introduction of its new Ram 1500 Revolution fully-electric pickup truck, with two 14.2-inch touchscreens, one of which is removable for use outside the vehicle, and its innovative Shadow Mode, which allows the truck to follow its owner at low speeds, perfect for delivering items to multiple nearby locations.

Set to debut in 2024, the 1500 also offers an innovative AI function that scans a product’s bar code or measures its dimensions with a camera to instantly determine where and whether it will fit into the vehicle.

Even The Squad, a pint-sized two-passenger street vehicle that strikingly resembles a golf cart, will be equipped with four swappable batteries that can travel up to 60 miles on a single charge at a speed of just under 30 mph. The Squad also comes equipped with a small solar rooftop panel that adds another 19.2 miles on a sunny day.

But the undisputed star of the show was the partnership between Sony and Honda, which are working together to manufacture and sell their unique, entertainment-infused line of electric vehicles under the brand name Afeela.

With 45 integrated cameras and sensors, and safety a top priority, the new line will ultimately feature Level 3 automated driving capabilities under limited conditions, meaning the car can drive autonomously in heavy traffic, but the human driver must take over when the system requests it.

The secret sauce, of course, is Sony’s full integration of Epic Games’ Unreal Engine, a popular video game engine, designed to allow all passengers, excluding the driver, to participate in software-driven entertainment activities while also allowing the vehicle to interact and share information with other drivers.

“In the future, the automobile will become a next generation destination for social connectivity,” said Kim Libreri, chief technology officer of Epic Games. “Not only for the occupants, but also their network of friends and colleagues. It will become a continuum of our digital lives.”

“Obviously, Sony is not known as a vehicle manufacturer; however, a lot of the technology that are in EVs, regardless of brand, have come from Sony. So we’ve been in the space of supporting things such as lens sensors that help with autonomous driving and things of that nature, so this was kind of a natural thing,” he said.

“Back in 2019, we began the Vision S Project, which was our first concept car and the idea behind that car was for Sony to showcase all of the possibilities of its technology in an EV car so that the rest of the industry could sort of take a look at it and pick and choose what elements they wanted to integrate,” Henderson added.

“Fast forward to where we are now and you look at the power and the history of Honda Motors and what they’ve done In their vehicle manufacturing. This joint venture between Sony and Honda to form Sony Honda Mobility seemed to be like a match made in heaven.”

While innovation in one area often launches a movement, every new approach requires support, and nowhere was that more apparent than in the dozens of power stations and charging options prevalent throughout the exhibition hall.

Automotive intelligence and diagnostics giant Autel showcased no less than a half-dozen vehicle charging stations ranging from the household version to kiosks and towers suitable for deployment in full commercial environments, including shopping malls, office buildings and service stations.

“We have a commercial unit designed so the owner can generate revenues in ways beyond just charging for the electricity,” said company spokesman Michael Peash.

“Our units have a touch screen which allow for advertising opportunities. You can put this unit into a shopping mall filling station for electrical cars. You can work with local restaurants and retailers and sell advertising space which provides another way for charging station owners to generate income. But also, in the near future, thanks to Autel’s background in automotive diagnostics, the system will learn information about the cars it services and let the owner know when it needs servicing … which will certainly be a major benefit for service stations and repair shops.”

What’s more, Peash said, the system can work in reverse: “In the case of outages, you can actually use your charging system to power your house.”

And therein lies the pure beauty of CES. While tech industry professionals attend the show to learn about what’s new, what’s hot and what’s coming, the world’s largest gathering for innovation and technology also allows us to see and envision the future.

And when it comes to battery powered vehicles, that future is much closer than we think.

Steve Winter and Kenny Fried are WTOP contributors who work for Brotman|Winter|Fried, a division of Sage Communications.