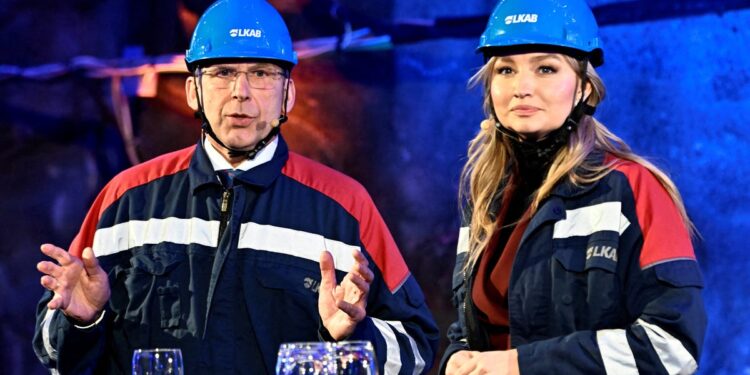 Here’s what you need to know

Europe’s largest rare earth deposit was discovered in Sweden. The reported 1 million tons of minerals, used in everything from phones to batteries, could be key to the green transition.

US inflation cooled. The consumer price index dropped 0.1% in December compared to the month prior, indicating the Federal Reserve is likely to reduce the size of February’s rate hike.

TSMC warned of plans to curb spending. The Taiwanese chip giant has lowered its budget and forecasted a revenue drop of around 5% this quarter due to weaker demand.

Bosch will build a $1 billion R&D center in China. The German engineering and tech company will use the future Suzhou plant to develop and assemble EV components.

Didi Chuxing is cutting jobs. The Chinese ride-hailing service is laying off hundreds of workers, the SCMP reports, amid belt-tightening efforts and Beijing’s regulatory crackdown.

What to watch for

Miss Universe has a new look. The pageant has an all-women line up of hosts and, for the first time, a woman owner—Thai media mogul and trans rights advocate Anne Jakkaphong Jakrajutatip.

Her media distribution company JKN Global Group bought the competition, which includes Miss USA and Miss Teen USA, in October for $20 million. The deal highlights increased popularity for pageants in countries like Thailand, the Philippines, and India—the birth country of the reigning Miss Universe, Harnaaz Sandhu, who will pass on the crown at the final on Jan. 14.

Jakrajutatip told Time she’s shunning the idea that pageants objectify women: “This year is a new year of Miss Universe, or I’d rather call it a new paradigm of the global female empowerment platform.” Next on her agenda is to move the competition from a one-time yearly event to a reality show series, although a distribution deal has yet to be signed.

Ro-ro your EV gently across the ocean

Before a car hits the road, it likely sailed the high seas aboard a massive, specialized ship called a roll-on/roll-off car carrier, or “ro-ro” for short.

Japan has long dominated the ro-ro ship space, accounting for 40% of the world’s fleet. By contrast, Chinese ships make up barely 3% of global capacity.

But as it exports more electric vehicles, China is muscling its way into the car carrier space. The commercial advantages of operating its own fleet are many. China can control costs, offer shipping to make its cars even more competitive on pricing, and potentially deny shipping services to rival firms or countries.

Primarily, though, it’s a big bet on the continued growth of global car sales, and China’s convinced it’ll pay off.

Seattle’s public school system is unhappy with the mental health of its student body, and is blaming it on four social media giants: Meta, ByteDance, Alphabet, and Snap.

The school system filed a lawsuit against the organizations last week, but legal experts think it’s built on a shaky foundation. The most salient legal claim in the case involves a little clause called Section 230, which, as Quartz’s Scott Nover explains, has become a lightning rod for social media criticism in recent years.

💰 Closing the gender pay gap has stalled. A new study reveals why

🤨 Could you be losing money with a manager title?

🕳️ Why an Indian Himalayan town is sinking

Future credit card swipes may come with a musical jingle. But first retailer hardware and software need a big update.

London’s Natural History Museum is under fire for greenwashing. It contractually agreed not to badmouth its donor, Danish energy company Ørsted.

Misinformation isn’t as impactful as we thought. But unfortunately, information also doesn’t pack much of an impressionable punch.

NASA’s James Webb telescope found its first Earth-sized exoplanet. LHS 475 b is 99% the size of our home.

Our best wishes for a productive day. Send any news, comments, ChatGPT poems, and names for LHS 475 b to hi@qz.com. Reader support makes Quartz available to all—become a member. Today’s Daily Brief was brought to you by Mary Hui, Ananya Bhattacharya, Sofia Lotto Persio, Julia Malleck, and Morgan Haefner.

How it will work for Ram EV

How it will work for Ram EV