From changing colour to flying, the five most buzz-worthy cars at CES 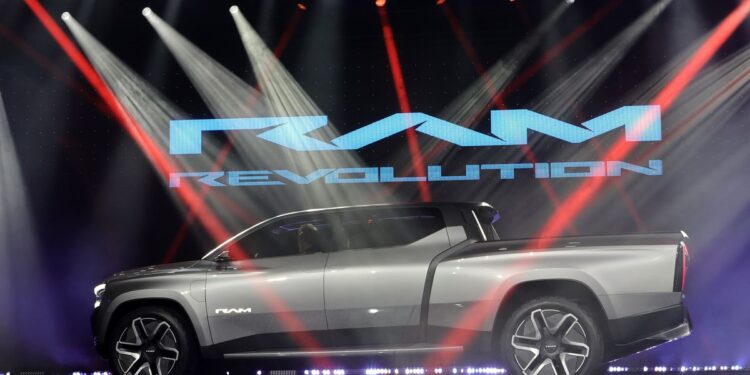 
The Consumer Electronics Show isn’t only about gaming devices, medical-tech gadgets and self-driving strollers – vehicles, especially electric and connected rides, are stealing the show. Here are the five most buzz-worthy cars on the show floor.

Ram is late to the electric truck party and will be joining a crowded field when it finally arrives, but it’s better late than never. Ram’s first battery-electric truck concept – the Ram 1500 Revolution – was unveiled Thursday. Design wise, it stays true to some of Ram’s traditional DNA – it’s big, bold and impossible to miss with deeply sculpted, muscular shapes and massive 35-inch wheels. The electric version gets a new face with bolder lighting cues. Rear-hinged back doors swing open to reveal no B pillar (the pillar between the front and rear doors) and a spacious, flexible cabin with removable seats, screens and a centre console. It also has sustainable touches including “Apple” leather, which is a bi-product from the apple industry that is animal and cruelty free and a textured floor that is made of recycled rubber and cork particles. It will take on electric trucks from Ford and Rivian (which are already on the road) and Chevrolet/GMC (available in early 2024) when it hits the road next year.

Sony stole the CES show in 2020 when it shocked the world, unveiling the electric Vision-S concept sedan. Fast forward a few years and it has raised the bar higher, partnering with a traditional automaker, Honda, to introduce a new EV brand called “Afeela.” Officials chose the name because “feel” conveys interactive mobility, which is at the heart of their first joint EV venture. The electric sedan is sleek with flowing lines. It will have about 45 sensors, including cameras, lidar and radar for semi-autonomous driving features. From Sony, expect an excellent entertainment and audio system for watching movies, playing games or listening to music on the road. Pre-orders begin in 2025 with expected deliveries in spring of 2026. No word on pricing, yet.

Look out Jetsons, flying cars are on the horizon. Several companies showcased their eVTOLs, or electric vertical takeoff and landing vehicles, at CES. These are concept vehicles that can drive on roads and fly to improve mobility and reduce one’s time spent in traffic. This one is the Ryse Recon. It’s designed to operate easily – regardless of your skill level and no pilot’s licence is required. Company officials call it “an aerial ATV anyone can fly.” It has six independent motors and six waterproof removable and rechargeable batteries. It can fly for about 20 minutes at an altitude of up to 700 feet and has a top speed of 100 kilometres per hour. It’s also ultra lightweight, tipping the scales at 290 pounds and has a payload of 250 pounds.

Volkswagen introduced another EV to its family. This one is its first electric sedan called the ID.7. It’s one of 10 new EVs the German automaker is planning to launch by 2026. It made its debut covered in a special digital camouflage, which uses innovative technology and multi-layered paintwork to create electroluminescent light effects on its body. Inside, it’s tech focused with an augmented reality head-up display, a 15-inch screen, digital controlled air vents and a personal assistant that understands natural language so the driver can say, “Hello Volkswagen, my hands are cold,” and the system will heat the steering wheel and direct warm air to the driver’s hands. The ID.7 arrives in Canada in 2024. Prices aren’t available, yet.

If you think picking your daily wardrobe is tough, wait until you see what the BMW i Vision Dee concept car can do. Owing to BMW’s colour-change technology, called “E-Ink,” you can change the exterior shade of this vehicle in the blink of an eye. Choose between 32 different colours so you can start the day driving to work in a purple car and return home in a checkered-pattern multi-coloured car that’s personalized to the driver. Crowds flocked to the vehicle; many mesmerized and falling into a trance by the constant stream of changing colours and patterns showcased.

The writer was a guest of BMW. Content was not subject to approval.

Shopping for a new car? Check out the Globe Drive Build and Price Tool to see the latest discounts, rebates and rates on new cars, trucks and SUVs. Click here to get your price.

Future of EVs in India | How EV is different from ICE | Are EV really GREEN ? [HINDI]