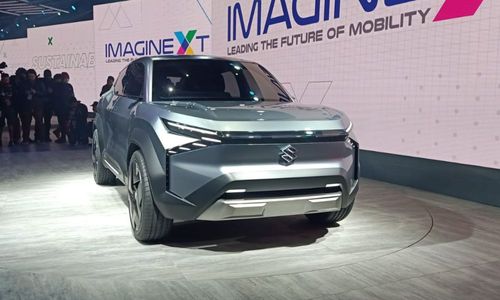 
Maruti Suzuki previewed is first all-electric model for India in the form of the new Concept eVX SUV. Unveiled at the Auto Expo 2023, the new Concept eVX has been developed from the grounds up by the Suzuki Motor Corporation Japan and sits on a new dedicated EV platform.

In terms of design, the eVX follows in line with most EV concepts with an eye-catching futuristic design while retaining the upright proportions of an SUV. The front is characterised by a blanked out grille and unique arrow-shaped headlamps. Fog lamps sit within the prominent black cladding on the lower bumper while a skid plate adds some toughness to the package. Prominent haunches, a sharp shoulder line and prominent use of cladding add to the SUV look at the side while the rear gets a chunky bumper, full-width lightbar tail lamps and an integrated roof-mounted spoiler.

The eVX measures in at 4,300 mm long, 1,800 mm wide and 1,600 mm tall making it the same size as most compact SUVs currently on sale in India. Maruti Suzuki said that thr concept sits on a long wheelbase though no actual figure was given.

Maruti did not reveal the interior of the concept though it said that the eVX offered high seating and maximised cabin space.

Coming to the powertrain, the Concept eVX featured a 60 kWh battery pack offering a driving range of up to 550 km per charge. The concept also featured an all-wheel drive system though no further details were revealed.

Maruti says that the concept will spawn a product electric SUV that is due by 2025. Maruti’s parent firm the Suzuki Motor Group also revealed that it was set to invest Rs 100 billion into the development and production of EVs and battery packs.

USPS aims to only buy electric delivery vehicles from 2026 on