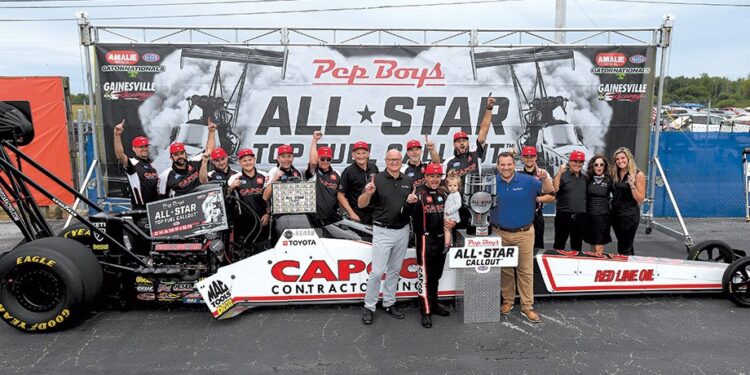 
With heavy anticipation and excitement, along with a bevy of new and returning faces and sponsors, the 2022 season in the NHRA Camping World Drag Racing Series had big expectations. In almost every way possible, the year lived up to its billing, attracting a record audience to television, enjoying sellout crowds across the country, and, thanks in part to a resurgent in nitro participation at several events, some of the finest racing action in recent memory.

The year started in Pomona with a host of returning faces, as the likes of Tony Schumacher, Bo Butner, and Austin Prock all returned to action in a full-time capacity. Tony Stewart Racing – with Matt Hagan driving in Funny Car and Leah Pruett in Top Fuel – made its NHRA debut at the opener, too, with the legendary team owner making his debut (in Top Alcohol Dragster) later in the fall in Las Vegas. NASCAR’s Rick Ware Racing also made the jump to NHRA with veteran Clay Millican, and the Maynard family became team owners of Schumacher’s dragster this year, helping put the nitro ranks on an exciting future path.

There were also new roles for veterans Antron Brown and Ron Capps, who made the giant step into team ownership. Both enjoyed tremendous success on and off the track, with Capps repeating as the Funny Car world champion to close out his incredible season. Need another major new? How about the new Toyota GR Supra Funny Car, which drew rave reviews for its innovation. J.R. Todd and Alexis DeJoria started the year in the car, and Capps soon jumped on board as well, winning five races in the car.

The opener was also the 900th career event in Pro Stock history, and it belonged to Erica Enders – a sign of things to come for the eventual five-time champ. That first-race excitement paved the way for the new Pep Boys NHRA All-Star Callout events, with the Top Fuel version starting in Gainesville. The unique format that included first-round (and second-round) callouts created an exciting new path for the stars in nitro. Rain prevented the completion of the Callout in Gainesville, but both the Pep Boys NHRA All-Star Top Fuel Callout and Pep Boys NHRA All-Star Funny Car Callout thrilled the fans at the Dodge Power Brokers NHRA U.S. Nationals, with Steve Torrence and Capps taking the victories.

Pep Boys’ impressive involvement in the sport was felt throughout the year, as the company also sponsored the Pep Boys NHRA Nationals at Maple Grove Raceway, the track rescued and restored by the Koretsky family in one of the many feel-good stories of the year.

As for sellout crowds, fans turned out in full force for the finale in Houston, as sellout crowds said goodbye to Houston Raceway Park all weekend long. They were treated to incredible racing, including the first-ever all-female final round in Pro Stock, as Houston’s own Enders knocked off rookie Camrie Caruso, the biggest highlight in her NHRA Rookie of the Year season.

More huge crowds turned up in Phoenix, Bristol, and Las Vegas’ fall race, with sellout crowds taking place in Epping, Sonoma, and St. Louis, as fans flocked back to the dragstrip following COVID-19. It showcased the rapid momentum building in the sport, and when it comes to fan turnout, it wasn’t just at the gates, either.

NHRA enjoyed its biggest viewership number ever, as an average of 1,678,000 viewers tuned in to the Pep Boys NHRA Nationals, besting the number from 2021. The audience also peaked at a whopping 2.8 million viewers, putting NHRA on its biggest stage yet.

NHRA was featured heavily on FOX throughout the 2022 season, including a stretch of eight of nine events. Tony Stewart appeared on a pair of broadcasts – the NHRA U.S. Nationals and the record-breaking event in Reading – while viewers showed up in droves. The race in Bristol, Brainerd, and Indy all featured strong increases in viewership over the previous year on FOX, while a strong turnout also took place late in the season on FOX Sports 1 with championships on the line.

With the spotlight on, the racing excitement was electric throughout the year, with records in both Pro Stock and Pro Stock Motorcycle falling in Gainesville. Brittany Force was a one-woman wrecking crew on the track record book, setting 16 track records in her dominant season that ended with a second championship and the fastest run (338.94 mph) in Top Fuel history.

Top Fuel took the spotlight in Indy, with 25 cars showing up at the Big Go as part of a spectacular 43-car nitro field. Indy dazzled, per usual, with Capps earning his first U.S. Nationals victory, Brown taking the Top Fuel win as part of the quickest field in history, Matt Smith rolling to the win en route to his Pro Stock Motorcycle-tying sixth championship, and legendary driver Greg Anderson picking up his 100th career win.

Right before Indy, NHRA released its video game, NHRA: Speed for All, on all major game platforms to rave reviews and plenty of satisfied customers, also putting NHRA on a positive path for future releases.

Beyond the Professional categories in the NHRA Camping World Drag Racing Series, NHRA announced several enhancements to the Street Legal program. The program will allow a broader and more diverse range of vehicles for the participants and give recognition to their on-track performance. The future stars of the sport in the NHRA Summit Racing Jr. Drag Racing League also competed in exciting eight-car shootouts at seven different national events, earning some television time in the process.

Showcasing the diversity in the sport, Mady Ayesh was named the first female Division Director in NHRA history, while Enders and Force gave NHRA two female world champions in the same season for the first time in history.

The iconic brand was one of many new partnership announcements in 2022. Simpson Performance Products was named presenting sponsor of NHRA Safety Safari, while Cornwell Quality Tools was named the Official Professional Tools of NHRA. New car sponsors included Scag Power Equipment and Phillips Connect, which introduced the exciting new 300 to the 1/8th program that will carry over to 2023.

Go Underground in These Berlin Tours Filled with History