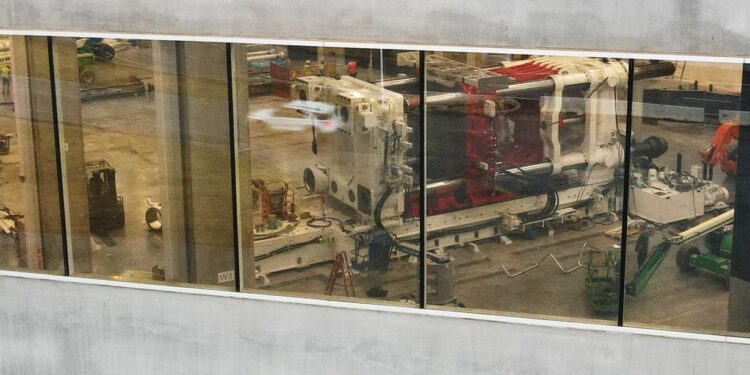 
In the past few weeks, images and videos from Gigafactory Texas have revealed that parts of IDRA’s 9,000-ton Giga Press for the Tesla Cybertruck were already being delivered to the facility. Recent photos of the complex now reveal that the assembly of the 9,000-ton press is progressing.

Drone operator Joe Tegtmeyer recently posted some stills from a flyover he conducted on the 18th of January. Among the most striking images from the flyover was a shot taken of Giga Texas’ interior, specifically the area where the 9,000-ton Giga Press was being assembled.

As can be seen in the image, the setup of the machine is ongoing, and a good portion of its components have already been set up. Tesla and electric vehicle enthusiasts on social media observed that the progress of the 9,000-ton Giga Press’ assembly is quite impressive, especially considering the overall size of the machine.

Tesla is among the most notable automakers using Giga Press machines for its vehicle production. The company currently uses 6,000-ton Giga Presses to form the Tesla Model Y’s front and rear underbody castings. Since the Cybertruck is a much larger vehicle, Elon Musk has noted in the past that the all-electric pickup would likely need an 8,000-ton Giga Press.

Interestingly enough, IDRA, which supplies Tesla’s Giga Press machines, seemed to have gone further with a 9,000-ton Giga Press. Musk is very supportive of the machine, commenting on a video of the 9,000-ton Giga Press in action last year and stating that it would be used for the “Cybertruck body.”

IDRA deserves a lot of credit for producing Tesla’s Giga Presses for its vehicles. During the Cyber Rodeo last year, Elon Musk gave a subtle shoutout to IDRA and its parent company, LK Technology, for being the only ones who were willing to take a chance at producing the machines Tesla needed.

“It’s a revolution in car manufacturing to basically make you car out of three major parts: a cast rear, a structural pack, and a cast front. So what you’re looking at are the biggest casting machines ever made. It’s kind of a crazy thing to make a car this way. It’s never been done before.

“When we were trying to figure this out, there were six major casting manufacturers in the world. We called six. Five said’ no,’ one said ‘maybe.’ I was like ‘that sounds like a yes.’ So with a lot of effort and great ideas from the team, we’ve made the world’s biggest casting machine work very efficiently to create and radically simplify the manufacturing of the car,” Musk said.

Watch a recent drone flyover of the Giga Texas complex below.

Nissan sweetens Ariya and Leaf EV ownership with these perks