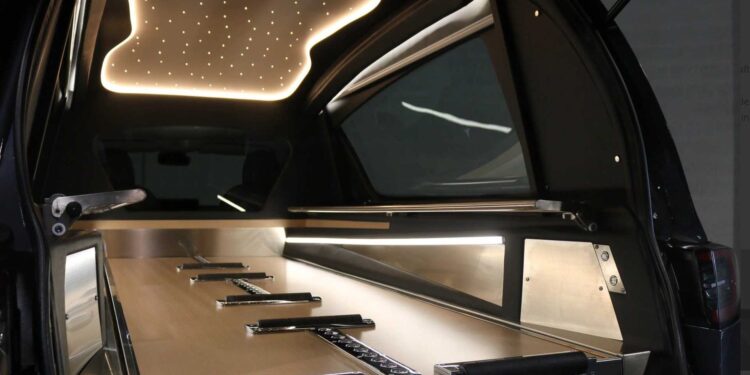 
Derks, a hearse and limo maker based in the Netherlands, has revealed its latest custom build. Taking a Model 3 Standard Range Plus, the company fully transformed it into a hearse. Despite the added weight and longer wheelbase, Derks insists its Model 3 hearse still has over 200 miles of real-world range.

The Model 3 hearse features plenty of neat touches, including LED lighting in the rear compartment and an optional starry headliner ceiling. Funeral directors will be glad to hear the hearse has a powered tailgate as standard, meanwhile electric curtains are also a no-cost option.

Electric hearses make a lot of sense, given most funeral trips are short with plenty of time to charge in between. Although this may be the first Model 3 hearse, we have seen plenty of Model S conversions in the past. Furthermore, Brahms Electric Vehicles unveiled a Nissan Leaf hearse back in 2017.

Derks did not disclose how much its Model 3 hearse costs. However, for reference Norwegian builder Jan Erik Naley sold his Model S hearse for the equivalent of just over $200,000 back in 2019.

The Tesla Model 3 is one of the most popular new cars in Europe, with its Model Y sibling also enjoying tremendous success. In fact, in September 2022 the Model Y was the best-selling vehicle in Europe beating out the substantially cheaper Peugeot 208 and Volkswagen Golf. However, it’s important to note in Europe Tesla only delivers its vehicles in batches once every three months or so.