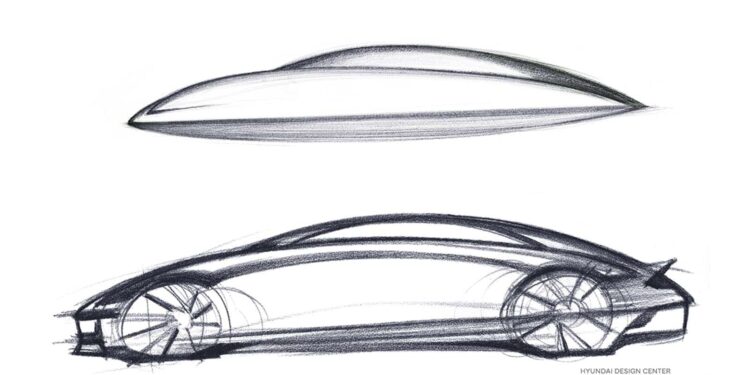 
It’s been a decade since the first mass market all-electric vehicle, the Nissan Leaf, was introduced. Early models were small, slow, and short on range. They also were offered in a limited range of body styles.

No longer, over the last year alone the number of battery-electric vehicles has more than tripled, with about 50 of them offering range of at least 200 miles – and one, the Lucid Air Dream Range edition, getting an EPA rating of over 500 miles per charge. Meanwhile, you can find EV sedans, sports cars, SUVs, and even some pickups.

Your options are set to grow yet again in 2023. There’ll be at least 25 new offerings from at least 17 different brands. Here’s a look at the dozen we think are the most significant EV models set to debut in 2023.

BMW i7: An early entrant into the EV market, BMW is rolling out an array of new models. We saw the compact i4 and iX roll into showrooms last year. Now, the automaker is readying an all-electric version of its flagship 7-Series. You’ll have to look closely to spot which one is the i7, however, as it shares underpinnings and its basic design with the traditional, gas-powered sedan – as well as the array of premium luxury features you’d expect in a 7-Series. But the i7 clearly takes advantage of its battery drivetrain, punching out a hefty 536 hp and 549 lb-ft of instantaneous torque. Expect a price tag starting around $120,000.

Chevrolet Blazer EV: After pushing extremes with the GMC Hummer EV and the Cadillac Lyriq, General Motors is now aiming at the mainstream with an all-electric version of the Blazer SUV. Set to go on sale around mid-year, the Chevy Blazer EV will offer up to around 320 miles range. It will come in four separate trim packages, from the base 1LT up to the high-performance SS model. And, in a first-of-a-kind for any passenger vehicle, Blazer will be offered in three distinct powertrain configurations, including front-, rear- and all-wheel-drive. the two-motor Blazer SS will blast out 557 hp and 684 lb-ft, making it one of the most powerful EVs yet in the fast-growing mainstream midsize SUV segments.

Chevrolet Silverado EV: In its “path to an all-electric future,” GM plans to launch 30 EVs by mid-decade, including versions of some of its most popular model lines. The all-electric version of Chevy’s full-size pickup will launch early in the New Year, initially focusing on fleet customers, with a retail version to follow later in 2023. The Silverado EV shares not a single body panel with the gas model and adds a distinctive flying buttress behind the cab. It also introduces a fold-down “mid-gate” to expand flexibility, the bed stretching to 9 feet. A variety of configurations will be offered, including one delivering 664 hp and 780 lb-ft. The RST First Edition will launch to 60 in less than 4.5 seconds.

Fisker Ocean: Designer-cum-entrepreneur Henrik Fisker was a pioneer in the battery-car space and he’s back with a new company and a new, all-electric SUV. The Fisker Ocean boasts a compact exterior but a midsize cabin. And it will be offered in a variety of different configurations, including all-wheel-drive. Range is expected to reach 350 miles per charge, depending upon the package. One of the quirkier details: an infotainment touchscreen that can rotate from a portrait to landscape position with the touch of a button. The base Ocean Sport will start around $39,000, with the top-line One model nudging up to around $70,000.

GMC Hummer EV SUV: While the all-electric utility vehicle has much in common with the Hummer pickup unveiled last autumn, it also has a number of key differences, starting with a 9-inch shorter wheelbase and a downsized battery pack. The 2024 GMC Hummer EV SUV also was designed to be even more nimble in off-road settings than the big pickup. The two Hummers will share an all-wheel-steer system that lets the rear wheels turn up to 10 degrees, along with the ability to “crabwalk” to get out of tight spots. The SUV won’t quite match the pickup’s power or range. But, at 830 hp and 300+ miles, it should still be an impressive package. The debut Edition 1 will start around $110,000.

Hyundai Ioniq 6: The Korean carmaker scored a big hit with its Ioniq 5 crossover and hopes to repeat that success with the launch of a second model based off the new E-GMP architecture. That skateboard-like platform contains batteries and motors, freeing up space for an unexpectedly large passenger compartment. Dubbed the “Electrified Streamliner,” Ioniq 6 will adapt a sleek sports sedan body style. That’s not only meant to be sexy but also highly aerodynamic to improve both performance and range. Final specs haven’t been released but something north of 350 miles per charge is considered highly likely. Expect an N trim package that could push out something on the order of 576 hp.

Jeep Recon: As an icon of a rugged outdoor lifestyle, the SUV brand might seem unlikely to embrace the switch to EVs, but Jeep has found a willing audience for plug-in hybrids and believes buyers will embrace all-electric technology, as well. A number of products are in the works, including a version of the big Wagoneer. But first off the line will be the Jeep Recon which, said brand boss Christian Meunier, “has the capability to cross the mighty Rubicon Trail, one of the most challenging off-road trails in the U.S. and reach the end of the trail with enough range to drive back to town and recharge.” What some see as an EV Wrangler will share many of the icons features, including removable doors.

Kia EV9: First shown in concept form at the 2021 L.A. Auto Show, the Kia EV9 has an exterior footprint similar to that of the automaker’s conventionally powered Telluride SUV. But the interior is positively cavernous in comparison. A key reason is the use of a new skateboard-like platform that will serve as the foundation for not only Kia’s future BEV line-up but those coming from sibling brands Genesis and Hyundai as well. There will be similarities to the automaker’s popular new EV6 crossover, the interior sharing the big twin-screen gauge and infotainment displays. But expect the bigger SUV to adopt a more lounge-like cabin.

Lexus RZ 450e: Toyota’s luxury brand has plenty of hybrids in the line-up. But the RZ 450e will be its first all-electric model. The overall look won’t take Lexus fans by surprise. It picks up on many of the angular design cues we currently see with conventionally powered models like the NX. But the “Seamless E-Motion” design language does add some distinctive elements, such as the sealed “grille.” The Lexus shares the same underpinnings as the more mainstream Toyota bZ4X but adds more luxury features, as one would expect. The Lexus also gets the  new Direct4 system which can shift as much as 100% of power to either the front or rear axles.

Mercedes-Benz EQE SUV: Mercedes has an array of EVs coming for 2023, including the EQE sedan and SUV versions of both the flagship EQS model, as well as the midsize EQE. Like those other battery-electric vehicles, the EQE SUV adopts Mercedes’ distinctive “one-bow” design language, essentially a single curve that flows over the roof, from bumper to bumper. But the two-box layout improves both rear headroom and cargo space. The cabin is a high-tech marvel, with the optional Mercedes Hyperscreen running pillar to pillar. Several packages will be available, including the EQS 500 4Matic SUV which, at 536 hp and 633 lb-ft, will hit 60 in 4.2 seconds.

Nissan Ariya: After a series of delays, Nissan’s second all-electric model, the 2023 Ariya, is finally in production and ready to start rolling into U.S. showrooms. The 2023 Nissan Ariya is roughly the same size as Nissan’s conventionally powered Rogue SUV, but the EV features a 2.8-inch longer wheelbase, stands an inch taller and is about 2 inches wider. Compared to the Leaf, Ariya adopts a more popular crossover-style body, delivers more power and substantially better range – though it will cost a fair bit more than the Leaf, one of the market’s most affordable battery-electric vehicles. Nissan will offer both single and twin-motor versions of Ariya, the Platinum+ e-4orce package making 389 hp.

Polestar 3: Polestar was spun off from Volvo in 2017 and focuses on a sportier, more exclusive model niche. The Polestar 2, its first all-electric offering, adopted a crossover body style. The Polestar 3 opts for a fastback shape that combines the more stylish elements of wagon and coupe. A twin-motor performance package will come to market first, with other options to follow. Expect range to reach as high as 300 miles, depending upon the powertrain choice. And Polestar 3’s 800-volt electrical system is designed to speed up charging. The new brand expects to start expanding its line-up rather quickly, with a Polestar 4 model to come before the end of 2023.

Tesla Cybertruck: Perhaps the most eagerly anticipated EV in the pipeline, Tesla reportedly has hundreds of thousands of advance reservations for the Cybertruck. The project has repeatedly been delayed but Tesla reportedly has begun tooling up its new plant in Austin to build the stainless steel-bodied pickup. CEO Elon Musk has promised to finally get Cybertruck into customers’ hands sometime in 2023. The all-electric rig adopts a decidedly sci-fi design unlike any pickup ever brought to market before. It is expected to be offered with a variety of different powertrain configurations and plenty of accessories, including a pop-up camper package.

VinFast VF 8 and VF 9: Among the many EV start-ups coming to market, VinFast is notable as the first automaker from Vietnam. It shipped its first allotment of VF8 crossovers to the U.S. in December and a handful of customers may take delivery before year-end. The VF 8 is a midsize, two-row crossover with a choice of several different powertrain layouts. The bigger VF 9 adds a third row. Both products will be offered with a choice of a conventional finance package – or the ability to lease the battery pack and pay less up front but add a monthly fee for the batteries. VinFast plans to launch a slightly smaller, two-row VF 7 model in 2023, as well, with at least two more all-electric crossovers to follow.

And there are more coming. The 2023 model-year is likely to bring as many as a dozen more all-electric models to U.S. showrooms. These include mainstream models such as a battery-powered version of the Chevrolet Equinox SUV, as well as upscale offerings like the Audi A6 e-tron.

We may also see the arrival of several more EV start-ups, including IndiEV which is launching an electric crossover called the Indi One; Canoo, with a distinctive new EV pickup, and Faraday Future. The latter brand was a seeming star when it first laid out plans to come to market five years ago. But it’s faced serious financial problems that have repeatedly delayed production. It recently lined up a new line of funding and hopes to finally have the FF91 supercar ready to roll this coming year.

Electric vehicle adoption and the future of EVs