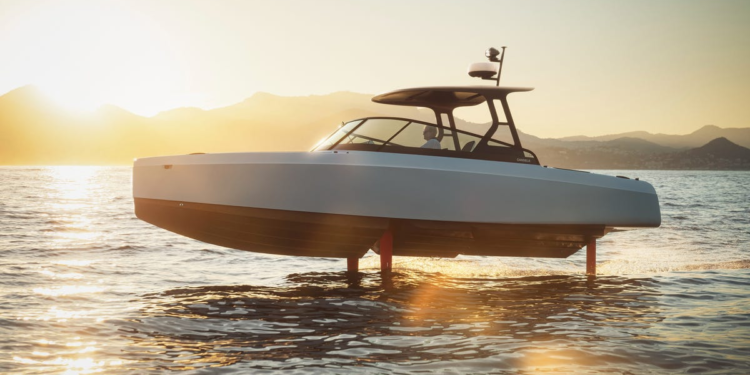 
If it’s hard enough to imagine seeing a flying EV car at CES 2023, we need to talk about the electric “flying” C8 boat from Sweden-based Candela that sees itself as the Tesla of boating in some interesting and important ways — especially when it comes to flashy tech at the helm and deep tech underneath the hull.

Aboard, I saw a large digital tablet next to the wheel — like a Tesla — and a spartan interior with Ikea-esque fabric cushioned seating and two racing-style chairs at the front. The entire boat is made of carbon fiber, including the seats, which explains the $390,000 price tag. And, unlike a Tesla, there’s a toilet inside.

(For more, check out our must-see reveals of CES, most futuristic tech and craziest future tech and gizmos.)

But the real focus is on high-end tech controls, like autonomous boating — where the C8 can stick to a set course — sensors and accelerometers to balance the boat when it’s in the air and a custom-designed motor.

Like a Tesla, this combination of EV motor and autonomous technology could help create a community of rarified EV boat owners who elevate their vehicle beyond a mere mode of transportation. As for the flight, hydrofoil boats move on “wings” below the water that keep the hull skimming — or “flying” — above the waves.

Candela’s choice to go EV isn’t surprising. As climate change concerns surge worldwide, so does electric vehicle production. Electric vehicles could make up a third of North American markets by the end of the decade, and roughly 26% of global vehicles, Reuters reported, citing AutoForecast Solutions. And here at CES, EV car announcements like this sensor-studded debut from Sony pull up alongside a flying EV car, electric inline skates and a foldable EV bike I admired, a growing current of commitment to electric vehicles of all types.

But during our demo, the emphasis was much more on Tesla-like technology than talk of emissions.

“A lot of our owners actually say that this is more of a leap for boats than Tesla was for cars,” Mikael Mahlberg, Candela’s head of communications, told me.

In fact, Candela says many of its current C8 customers are first-time boat owners, the same folks who were early to buy into Tesla’s high-end EVs.

“They have a Tesla car and their family thinks that, ‘Are you going to buy a 600-horsepower gasoline-powered boat and go out with that when you have an electric car on land?'” Mahlberg said. “And they cannot really fathom the idea of doing that, so they want something that is better than fossil fuel boats.”

Like Tesla, another factor that Candela says makes the C8 boat exciting to its buyers — other than being an early adopter of EV in its respective industry — is that all the parts are built in-house.

The EV boat doesn’t rely on external vendors to supply the user interface, motor or even the steering wheel. This tight control lets engineers quickly send out over-the-air updates and improvements to the cabin tech (that large display).

Mahlberg said that Candela sends out two updates per month on average.

The EV motor is all about efficiency

Even though the electric-powered C8 goes up to 30 knots (around 34 mph), which is very fast by boating standards, Candela still went through computer fluid dynamic simulations to make it as aerodynamic as possible.

At that speed, aerodynamics don’t make a massive difference, but it’s that 10% gain in efficiency that gives owners an extra 3 or 4 miles of range.

“It’s more like a design philosophy. It was to squeeze out every kilowatt hour from this battery,” said Mahlberg. “Because if you don’t do that, if you’re relaxed with that, you lose so much efficiency.”

As for total range, Mahlberg says it’ll go for 50 nautical miles, or the equivalent of 57 miles. He said that’s well above the range of the average boater.

The C8 doesn’t have regenerative braking like an EV car — which uses the kinetic energy from braking and turns it into electricity — but Candela did find small ways to add some back-end charging. For example, as the wings tilt up and down with the current, that kinetic energy charges the batteries.

When I asked if the C8, when in a stationary position, can generate any power, Mahlberg theorized that the propeller does move with the natural current of the water.

With a software update, it could be possible to generate power and have it charge while docked, like a mini hydro turbine generator.

If the Candela C8 does generate power this way in the future, it could give the nascent EV boating industry one more reason to get on board with electric motors and a big tablet at the wheel — and much more like the Tesla of the sea.

The hidden barrier to V2X: How states and utilities can open the floodgates for bidirectional EV charging