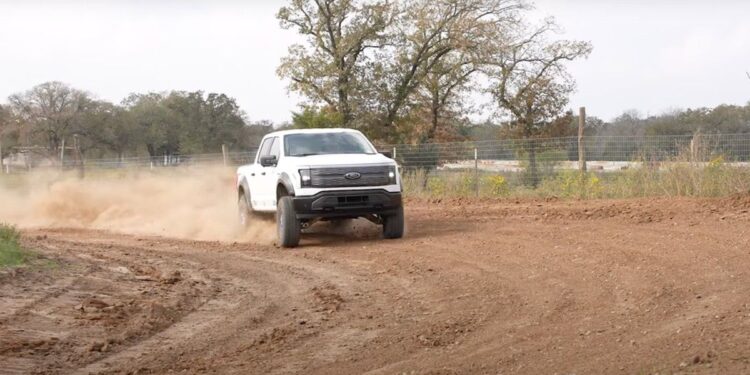 Ford has a long history of developing high-performance pickup trucks. Dating back to the early nineties, the first Ford Performance truck showed on-road prowess with off-road ruggedness. The first SVT Lightning was powerful and mean, but the second generation is where the serious on-road performance came into play with a sacrifice in off-road capability. However, sport trucks were popular enough to warrant the big V-8 and rear-wheel drive setup. When the SVT Raptor debuted, the baja-bashing pickup was in a class of its own, and continued to do so until the Ram TRX debuted. Now, one dealership has created the perfect combination of power, torque, off-roadability, and street performance in one.

TOPSPEED VIDEO OF THE DAY

Reported by Ford Trucks, Texas dealership Leif Johnson Ford has built an epic off-road rig from none other than the new all-electric Lightning. While Ford themselves have said there would not be an electric Raptor just yet, the dealership decided to see what they were capable of with this custom build. Starting with the top level Lightning, the truck was then fitted with off-road tires, suspension pieces from the second-generation Raptor and from Saleen, as well as some custom parts, inlcuding 3.0 DSC internal bypass shocks in order to account for the rear electric motors. The end result – an off-road beast with seemingly endless torque.

Is The Modified Lightning Show Or Go?

The finished truck looks awesome, EV or not

After trailering the truck to an off-road testing park, the truck was refitted with custom Method Racing wheels and 35-inch tires and hit the trails. As you would expect, the instant torque and instant throttle response rocket the truck away. Flying sideways around corners, the Lightning looks perfectly at home on the dirt. Floating over rough bumps and uneven terrain, the Lightning kept pushing further and putting more power down as it moved from pavement to dirt to gravel and more. The truck hurtled around corners, kicking dirt in every direction as it did so.

Related: Here’s How Fast The Ford F-150 Lightning Really Is

The Lightning Performs Flawlessly Off Pavement

The modified Lightning seems to have no issue tackling banking turns, mud, loose terrain, and just about everything thrown at it. On 35-inch tires, the truck is unstoppable, even if it does not have the factory off-road performance of the Rivian R1T. With the number of parts shared with the Raptor, it comes as no surprise how well the Lightning performs off-road. At one point, the 6,000-lb. pickup even got air as it jumped off of a steep dirt jump in the track. The serious off-road prowess the Lightning has when fitted with little more than slight aftermarket upgrades shows just how capable the platform was to begin with.

Is This The Ultimate Off-Road EV?

Although Ford has not mentioned if there would ever be an off-road variant of the Lightning, the looks and capabilities of this one built by Leif Johnson Ford more than proves that they should. Fitted with the Raptor’s over-fenders, this build looks like a specialty-built vehicle designed for sale. By working with Saleen and SaleenTSW, the truck came together perfectly. Even more impressive – by the end of the day blasting around the track, running digs and jumping off of mounds and other obstacles, the truck still had nearly eighty percent of the battery charged.