TNM Tries To Whitewash Keezhvenmani Sins Of EVR And DMK 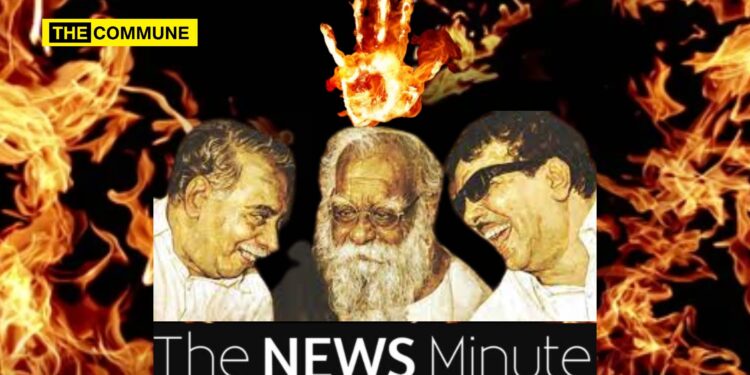 
On 24 December 2022, The News Minute (TNM), which is popularly perceived as the unofficial mouthpiece of Dravida Munnetra Kazhagam (DMK), published an article titled, “‘Keezhvenmani changed me’: 96-yr-old TN activist recalls a brutal massacre of Dalits.”

There is nothing wrong with describing the ordeals endured by Dalits under the Pannaiyars (Zamindars) during the Keezhvenmani incident, as the next day, 25 December 25 2022, marks the anniversary of the gruesome incidents in Nagapattinam district in which 44 Dalits were burned alive by the Pannaiyars.

However, the date of publication of the article as well as the content within the article require careful consideration.

The date of TNM’s Keezhvenmani article coincided with the death anniversary of EV Ramasamy Naicker, a rabid anti-Brahmin and anti-Hindu bigot known for his hate speeches and for his controversial stance on the Keezhvenmani issue, indirectly supporting the perpetrators.

The TNM article, published on the eve of the Keezhvenmani massacre, can be seen as an attempt to whitewash EVR’s role in trivialising the massacre.

Even now, there is much controversy surrounding the Keezhvenmani massacre, with many accusing EVR of implicitly supporting Gopala Krishna Naidu, the main perpetrator of the massacre, because both EVR and Gopalakrishna Naidu were from the same caste.

Dravidar Kazhagam and other EVR supporters’ main defence justifying his stance in Keezhvenmani issue is that EVR was old and sick and hence he did not talk anything about the issue when it happened.

However, the real reason is that EVR avoided commenting on the matter because the perpetrator, Gopalakrishna Naidu, is of his own caste.

It should be noted that he was always anti-Brahmin and never pro-Dalits. Contrary to EVR supporters’ claims that he was ill during the Keezhvenmani massacre, history records that he spoke at a public meeting in Sembanur Kovil on January 12, 1968, just a few days after the massacre.

He not only trivialised the Dalit massacre, but he also blamed the massacre on Communists who fought for the Dalits.

Blaming the Communists and asking Dalits to live within their means rather than protest for pay raises, EVR said, “Without telling you how the workers should live with what they have, the Communist comrades are trying to create riots and revolutions in Tamil Nadu and overthrow this regime.”

This was seen as an attempt to save the then DMK government led by Annadurai, a man of the Mudaliar caste who was perceived to be pro-Zamindars.

Though the accused, Gopalakrishna Naidu, was sentenced to ten years in prison in lower courts, he was acquitted of all charges by the Madras High Court in 1975, during Karunanidhi’s tenure as Chief Minister of Tamil Nadu.

It was told that he was acquitted of all charges as the DMK government failed to present its case properly in court.

This Dalit massacre in Keezhvenmani is a perfect example of then-Chief Minister Annadurai’s inefficiency in enforcing state law and order.

It’s not that then-CM Annadurai was unaware of the rising tension in Keezhvemani prior to the massacre.

In his book “Venmani Thee,” author Ko Veeraiyan stated that he wrote a letter to then-CM Annadurai on 12 December 1968, a few days before the massacre, stating that a group under the Paddy Procurement Association led by Gopalakrishna Naidu had planned to burn Keezhvenmani requesting that then-CM Annadurai take immediate action. The author mentioned that no action was taken despite the assurance given by CM Annadurai.

The author of the TNM article, Nithya Pandian, stated in her article that Mirasdars in Thanjavur practised “Saanipaalum Savukkadiyum” (forcibly making them drink cow dung mixed in water and flogging with whips).

This begs the logical question, who was the Chief Minister at the time of those practice, and what was he doing to put an end to “Saanipaalum Savukkadiyum”? The answer is that the DMK, which ruled Tamil Nadu at the time and even now, is always pro-Mirasdars.

This attitude of the DMK leader behaving like a Mirasdar can still be seen today. Palanivel Thiagarajan, Finance Minister in the DMK government, is a classic example of having Mirasdar attitude, boasting about his ancestors’ social background and dismissing anyone who questions him by asking, “What is your qualification to question me?”

The TNM article also subtly injects anti-Hindu venom. The author cited a conversation between Karunanidhi and NGO founder Krishnammal in which Krishnammal requests land for Dalits.

Karunanidhi had apparently asked Krishnammal, “From where will we get the land?” to which Krishnammal allegedly replied,” if government can allot 1,000 acres of land to Thiruvarur temple to make Aval Payasam (Poha desert) for the presiding lord, why not for Dalits.”

This alleged conversation may or may not have happened. But, what is the necessity to share an incident involving a temple snub? It seems as a clever ploy to shift focus away from the actual perpetrators of Keezhvenmani massacre.

The alleged journalist of TNM also mentions a conversation between Karunanidhi and the NGO Krishnammal, ” The meeting resulted in government support for the cause she espoused. LAFTI was registered in 1981.”

Reading these sentences, one gets the impression that LAFTI was registered in 1981 as a result of a meeting with Karunanidhi. But it was MGR who was the Chief Minister of Tamil Nadu in 1981.

Hence, every unsuspecting TNM subscriber who is paying money to read these distortions must ask the following questions:

1. Why is there no mention of EVR trivializing the Keezhvenmani massacre?

2. Why is there no mention of the regime under which the Massacre happened?

3. Why is Karunanidhi being portrayed as the saviour here? Why not leave out Karunanidhi’s part in the article like she skipped the other political figures involved?

These questions arise because the author blamed Jayalalitha for the growth of ‘right wing groups in Tamil Nadu’ in her previous article titled “The systematic attack on Christians in Tamil Nadu’s Hindutva laboratory,” when the reality is that the only two communal tensions between Hindus and Muslims in the Kongu region occurred during Karunanidhi’s regime in 1997 and 1998.

The DK and DMK are trying hard to hide their sins from the past by rewriting history.

Once again, TNM has proved that it is infact TN’s Murasoli.

Click here to subscribe to The Commune on Telegram and get the best stories of the day delivered to you personally.

Electric Vehicles Will Be a Trillion-Dollar Industry. 3 Things Investors Need to Know

Great Scott! This Flying Car Could Roll Out Sooner Than You Think