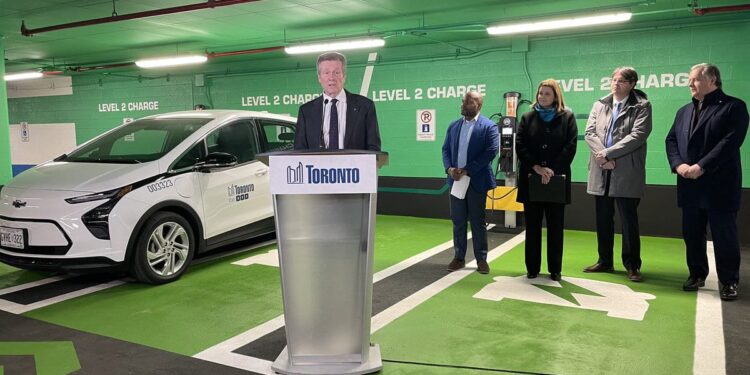 The eight chargers are just the start of the parking operator’s wider plans to develop a comprehensive network of EV infrastructure across the city. The TPA is supporting a multi-year Electric Vehicles Charging Initiative across its properties.

“This EV initiative is another example of the progress we are making moving our city forward and working on solutions to achieve our Net Zero emission goals,” said Toronto Mayor John Tory in a press note.

“We are working hard as a City government to tackle climate change at the local level, and we have a lot more work to do. With all our City partners, including the Toronto Parking Authority, working together, we will get there.”

The TPA launched the initiative to encourage the wider adoption of EVs and support the city of Toronto’s Net Zero strategy, TransformTO, which has a target to reach net zero emissions by 2040. The City is aiming to have 30 per cent of all registered vehicles to be electric by 2030.

In the coming weeks, there will be 117 more EV chargers installed at 11 different off-street Green P parking facilities in Toronto’s downtown core.

Targets for on- and off-street chargers

There are currently 47 on-street chargers in the city’s residential and downtown areas. The on-street sites were installed by Toronto’s Transportation Services Division, in partnership with Toronto Hydro, as part of a pilot project started in 2020.

And, by 2025, TPA expects to have more than 650 EV chargers (both Level 2 and DC fast chargers) in off-street and on-street locations.

“As demand for electric vehicle charging continues to grow, current and future EV owners expect a charging network that offers simplicity, speed, choice, and ease of use,” said TPA president Scott Collier, in a press statement.

“As the largest municipally owned commercial parking operator in North America, we have a tremendous opportunity to leverage our off-street and on-street portfolio of parking services to help drive EV adoption.”

Finally, as the operator of Bike Share Toronto, TPA will also use the existing electrical infrastructure from that program to coordinate and set up more electric Bike Share stations in suitable areas.

A pilot project for e-bikes with 300 e-bikes and three e-bike charging stations (e-stations) was started by Bike Share Toronto in 2020. The TPA has committed to increasing the number of e-stations and e-bikes in the Bike Share Toronto fleet in response to the popularity of e-bikes among users. According to Bike Share Toronto’s Four-year Growth Plan, the TPA plans for nearly 20 percent of the bike fleet to be electric by 2025.

Around $22.8 million is needed to build out TPA’s EV charging network through to the end of this year.

Additionally, the TPA has received approval for $2.25 million in funding from The Atmospheric Fund, an Ontario-based GHG solutions nonprofit, and Natural Resource Canada’s 2021 application round of the Zero Emission Vehicles Infrastructure Program (ZEVIP).

The parking operator has also submitted an application for $5 million under the ZEVIP program in 2022. The decision on the application is expected by early 2023.