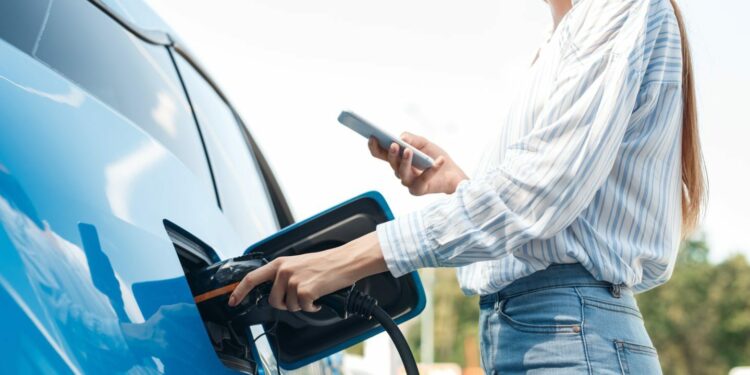 
Poor mobile phone connectivity may hamper the success of national electric vehicle (EV) charger roll out plans and impact the safety of users, a study has found.

The survey of 96 locations revealed one in five locations has only a 50% chance of getting coverage.

Mobile connectivity at public EV charging points is often vital for “filling up”.

This is because most charge points don’t allow users to just park up and plug in.

They often require EV owners/drivers to either download an app or visit a web page to pay for their charging session.

So without a mobile phone signal, they can’t charge their car.

A weak mobile signal may also leave users unable to access support if something goes wrong during their charging session, or if they feel unsafe in locations such as dimly lit corners of car parks.

The survey of 4G signal coverage at charging locations across Scotland and the north of England also found just 67% had access to mobile coverage from all four mobile network operators.

And one in 20 received no mobile coverage at all.

I’ve lost count of the number of times I’ve found the display showing a ‘communication problem’, or having an insufficient mobile signal to even start a charging session via an app.”

Steve Smith, head of smart places, FarrPoint, believes that if digital connectivity is not taken into consideration at EV charging points, there could be major problems ahead.

These would centre on not only the efficiency of the charging network but also the safety of users, he said.

‘This isn’t just a rural issue’

Mr Smith added: “Our research backs up my own anecdotal experience as an EV driver.

“I’ve lost count of the number of times I’ve found the display showing a ‘communication problem’, or having an insufficient mobile signal to even start a charging session via an app.

“This isn’t just a rural issue; many urban charging point locations suffer from the same mobile connectivity problems, and in many cases, the situation is not improving.”

“Action must be taken to improve mobile coverage at charge points already in place, or an alternative solution will have to be developed.”

Farrpoint’s research follows the launch of a campaign by online car marketplace heycar which calls for the UK Government to introduce minimum safety standards at EV charging locations.

The aim is to make EV charging locations safer for women and vulnerable users.

Heycar is calling for a new requirement for EV charging locations to be well-lit, with monitored CCTV cameras and emergency contact buttons as a minimum.

EV locations that meet this standard would be identified with a kitemark so drivers know they can use them with confidence at night or when they are alone.

The campaign is supported by Volkswagen Financial Services UK.

Did you know that 62.9% of drivers say security measures at EV charge points aren’t adequate?

Women in particular feel vulnerable charging their EVs. For this reason we’re calling on the Government to introduce minimum safety and security standards for public EV chargers. More👇 pic.twitter.com/D4mSscgZ1s

“At the moment it can feel like playing roulette – drivers don’t know what they’ll find when they arrive.

“The charge point could be at the back of an empty, dimly-lit car park with no security cameras and it may not even be working – potentially leaving them stranded if they don’t have enough charge.”

VWFS UK senior fleet consultant Emma Loveday added: “There is a risk of women being subjected to unwanted behaviour and, worse, being attacked.”

Mr Smith, of FarrPoint, said: “Operators should be thinking about ways to make the EV charging infrastructure safer, as lack of connectivity can also cause potential safety issues at charging points.

A survey of 500 drivers by motoring advice website HonestJohn.co.uk found almost nine in 10 respondents chose not to use a charge point because they felt unsafe at the location.