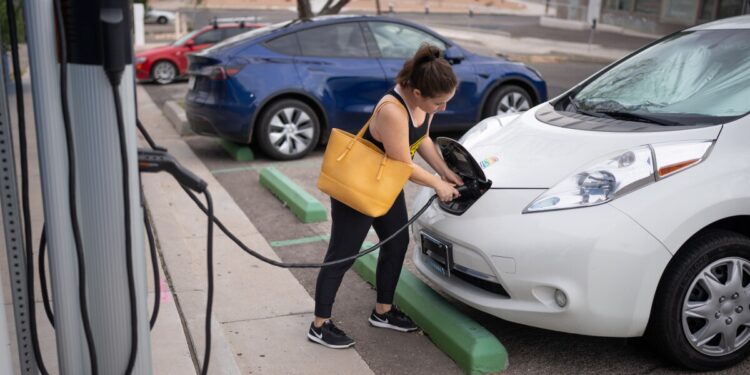 
Billions of dollars for electric vehicle infrastructure is making its way into communities across the country –– with an emphasis on tribal and rural areas.

While this is a crucial first step for equitable access to modern technology, much more needs to be done to make EVs in New Mexico a feasible reality.

New Mexico is slated to receive $38 million over the next five years for the National Electric Vehicle Infrastructure or (NEVI) Formula Program — made possible by the $1 trillion infrastructure legislation that passed last year.

The aim is to create a national EV network to both improve accessibility and incentivize EV use.

New Mexico’s plan would place around 43 EV chargers in 50-mile increments along more than 2100 miles of major travel corridors like I-40 and I-25.

However, compared to some other states New Mexico will have to go farther for less.

For example, the state’s network will cover 100 more miles than North Carolina, which got nearly three times more money. Similarly, the District of Columbia and its already well-established charging network will get over $16 million dollars for just 27 miles of coverage.

Regardless, many tribal communities are optimistic about the promises of electric vehicle infrastructure.

Robert Blake is the founder and CEO of Solar Bear. It specializes in all sorts of solar installation projects on tribal lands.

“I am so happy that this is happening for tribal country,” Blake said.

Blake said that he has witnessed first-hand how difficult it has been for Native communities to secure funding in the past.

“You couldn’t get financing for the solar project from the banks,” he said. “They wouldn’t even look at it.”

“It will make an enormous difference in the convenience for electric vehicle owners,” Heinrich said.

He likens EVs to how cellphones slowly evolved into the mini computers we all have in our pockets today.

“We are going to be in a more electrified world going forward,” Heinrich said. “So, we’re simultaneously going to have to live with the infrastructure we have and build the new infrastructure that will service all of that.”

But existing infrastructure is already lagging in some communities.

Environmental tribal groups like Diné CARE on the Navajo Nation say their communities lack basic amenities like an electric grid, and roads to make use of EVs.

They also point out that resource extraction, not cars, is the biggest source of greenhouse gas emissions in their communities.

And then there is the cost of EVs themselves. A Kelley Blue Book report released in July found the average price for a new electric vehicle hit a new high of over $66,000 –– $18,000 more than a new gasoline powered car.

On a recent swing through New Mexico, Department of Transportation Secretary Pete Buttigieg acknowledged this, but said this funding will open up lots of possibilities in New Mexico.

“Well I think seeing is believing,” said Buttigieg. “But, especially with tribal and rural communities because they can be plugged in anywhere. At home. At work.”

He said his department is actively taking steps to reduce the sticker price through the Inflation Reduction Act, which provides tax credits on the purchase of new and used EVs.

Though, he admits the switch will be a slow-moving process.

“Not everybody is ready overnight,” Buttigieg said.

Some see going slowly as a plus. Jay Johnson is a cybersecurity researcher with Sandia National Laboratories who found remoteness of these EV chargers makes them prime targets for hackers to gain access to entire electrical grids or personal credit card information.

“They are almost certainly going to rely on local law enforcement to address these things,” he said. “So, you can imagine some of these devices have door alarms and if the response time is not a few minutes, but rather, several hours, that would potentially allow an adversary to make more modifications or change different settings on the device.”

Johnson’s team looked at all types of chargers proposed in the NEVI plan, including extreme fast chargers.

All of them had security flaws.

Some of the differences for these remote regions is the vast majority of the EV chargers are connected to cellular networks,” Johnson said. “It’s possible you would have poor cell reception or even no cell reception out there.”

Which he said would exacerbate issues with firmware updates and billing.

They are currently working with other national laboratories on recommendations to strengthen electric vehicle infrastructure.

Johnson stresses that, as we continue to electrify more of the transportation industry, it’s clear that outages, malicious intent, and lack of planning might have broader implications than just for rural and tribal communities.

It could disrupt our mail systems and how we get to work, or even take down military and emergency services and entire economies. To him, the future is not to be rushed.

How Much Does It Cost to Build and Install a Level 1 Electric Vehicle (EV) Charging Station?

Is Hydrogen the Future of EVs in the ME Region? FUSE interviews Kyle Weber