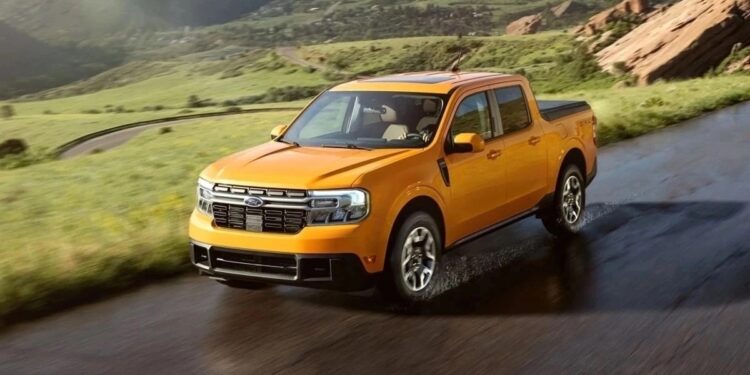 
The Ford Maverick has proved itself to be an extremely popular small truck. It comes standard with a hybrid engine and an affordable price tag. It is a vehicle that both consumers and experts have praised consistently. But, with the future of the automotive industry being electric, could Ford give the Maverick the EV treatment?

Is the Ford Maverick electric?

The Ford Maverick is not an electric truck, yet. You can get it with a standard hybrid engine or opt for a more powerful EcoBoost engine. That said, it would not be surprising to see Ford’s small truck get an electric powertrain.

Clearly, Ford is not afraid to make EVs. Even if they are a bit controversial, I’m looking at you, Mustang Mach-E. The Blue Oval’s flagship vehicle is also offered as electric now, the Ford F-150 Lightning.

According to Electrek, Ford has filed trademarks which could indicate an electric Maverick. The Maverick “Thunder” could be some kind of performance variant, but it could also be an electric truck. At this point, the Blue Oval has remained pretty shy with its intentions.

The Ford Maverick could go electric

There are a lot of benefits that come from an electric truck. You don’t have to deal with the traditional horrendous fuel economy, and you can enjoy instant delivery of torque. Now, folks have reported that the Ford F-150 Lightning takes some big range hits while towing. But with the Maverick, it’s a small truck. It’s unlikely that owners will be doing serious towing.

The electric version of the F-150 is already a pretty popular truck. So it’s clear that some consumers are willing to embrace the EV life with a pickup. You might make some sacrifices, but there is something cool about an electric truck.

Is there a plug-in hybrid Maverick?

The Ford Maverick does come standard with a hybrid engine, but there is not a PHEV version. If the Blue Oval does not make an electric Maverick, a PHEV would be the next best thing. With a plug-in hybrid, you get the benefits of a traditional combustion engine along with some electric range.

That fact should help with any range anxiety, and if you aren’t driving that far, you can get away with just using your electric range. Ford does have the technology to make a Maverick PHEV. And there have been some spy shots to hint at one.

But again, automotive brands are typically fairly secretive with plans. Leaving us to speculate on what could happen. It is hard not to see the Blue Oval embrace some kind of electrification for its small truck.

In a world where the F-150 and the Mustang have gone electric, why not make the Maverick an EV? Ford’s small truck certainly does not have the same heritage as those models. But, purists would probably find something to get mad about anyways.

Elon explaining in 20 minutes the buying opportunity for Tesla stock

The reality of living with an EV that nobody talks about !!