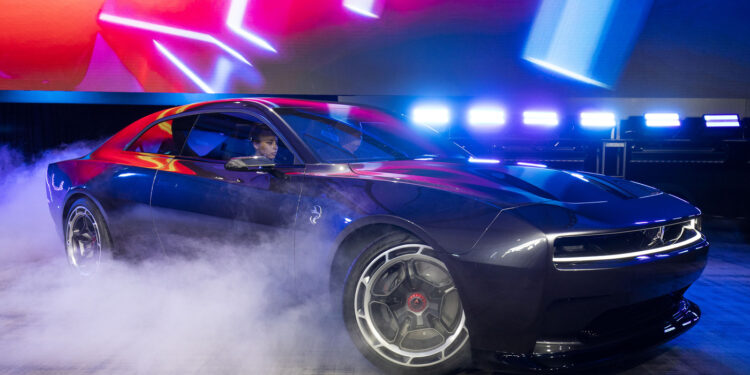 The Dodge Charger Daytona SRT Concept all-electric muscle car is shown at its world reveal during Dodge’s Speed Week at M1 Concourse on August 17, 2022 in Michigan. As the popularity of EVs explodes, U.S. battery production is rapidly growing.

The Dodge Charger Daytona SRT Concept all-electric muscle car is shown at its world reveal during Dodge’s Speed Week at M1 Concourse on August 17, 2022 in Michigan. As the popularity of EVs explodes, U.S. battery production is rapidly growing.

These days, billion-dollar plants to make the massive batteries that power electric vehicles are announced so often that — even if you follow the auto industry — it’s hard to keep track of them all.

Did you hear about the one from KORE Power in Arizona? Samsung and Stellantis in Indiana? The Chinese project in Michigan, the Norwegian one in Georgia, the Japanese one in South Carolina?

Or, if you aren’t impressed by a billion dollars any more, how about the $5 billion electric vehicle and battery project in Georgia? No, not that one — the other one.

All these factories — plus even bigger ones from Ford and General Motors — are part of a remarkable industrial shift.

Automakers are preparing for electric vehicles, currently around 6% of new vehicle sales in the United States, to conquer a huge share of the market in just a few years. That means companies will need a tremendous number of batteries.

The think tank Atlas Public Policy recently tallied all the announced projects located in the United States, as part of research supported by an automaker trade alliance, and provided updated numbers to NPR in December. All told, the group counted more than $128 billion of announced investments into electric vehicle plants, battery plants and battery recycling.

In 2022 alone, companies announced more than $73 billion in planned projects — more than three times the previous record, set in 2021.

Beyond the battery belt, production is spreading to many parts of the U.S.

Political pressure is building on companies involved with battery production to reduce reliance on China and create American jobs. China currently hosts as much as 90% of global production of some key components for batteries.

But there are also business reasons for moving to the U.S., as companies seek to rapidly expand output and avoid supply chain disruptions.

In the last year, the company has opened a new electric assembly line at its Chattanooga plant (cost of conversion: $800 million), with batteries sourced from a new SKI plant located a few hours away in Georgia (price tag: $2.6 billion).

Scott Keogh, President & CEO of Volkswagen Group of America and Scotty Reiss, Founder and CEO of a Girl’s Guide to Cars attend SXSW at ID. Buzz Stop on March 12, 2022 in Austin, Texas. The car is another entry into the growing EV field.

Scott Keogh, President & CEO of Volkswagen Group of America and Scotty Reiss, Founder and CEO of a Girl’s Guide to Cars attend SXSW at ID. Buzz Stop on March 12, 2022 in Austin, Texas. The car is another entry into the growing EV field.

Many of the new U.S. projects are going up in the Southeast, earning the region the nickname the “battery belt.” But Tom Taylor, an analyst with Atlas, says the trend is geographically wider than that.

All told, companies say those plants will create more than 150,000 direct jobs, according to Taylor.

It’s much easier to announce a new battery plant than to actually open one. Tesla, which pioneered these kinds of plants, is currently facing headwinds at its new Berlin Gigafactory.

And while GM has successfully opened a new battery plant in Ohio, CEO Mary Barra had to defend the slow pace of production there on a recent call with investors.

“Let’s step back and recognize that the Ohio plant is the size of 30 football fields, and it will employ over 1,000 people,” she said. “Making sure we had all our people there and trained has taken a little longer than expected.”

Given the challenges of executing projects this big, it’s fair to view all the announced figures with a dash of skepticism.

And that’s particularly concerning to some critics, because not all of those billions of dollars are coming from companies — a big chunk of it is footed by taxpayers.

Nearly $14 billion in state and local subsidies went to electric vehicle plants and battery factories this year, according to the subsidy watchdog group Good Jobs First, which has criticized both the size of the subsidies and the lack of transparency around them.

But boosters and critics alike agree on one thing: vast quantities of money will likely be pouring into new U.S.-based battery plants for a while.

Most of the announcements tallied by Atlas predated a national climate bill that passed this summer, which included hefty incentives for U.S.-based electric vehicle manufacturing.

Given that, “it’s a reasonable assumption that that number is going to keep going up,” Taylor says.

The History of Electric Vehicles