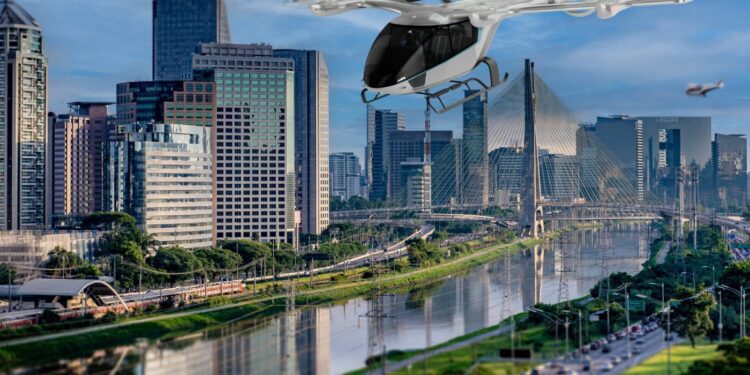 Eve Air Mobility said it has secured nearly $100 million in new funding from the Brazilian development bank (BNEDS), providing more leeway for spending as the eVTOL developer works to bring its first aircraft into service in 2026.

The funding comes in the form of two new lines of credit linked to domestic environmental strategies, and they collectively total about $92.5 million, the company said.

This brings Eve’s total liquidity to more than $400 million and may help offset significant projected cash burn over the next few years.

“We’ve reached an agreement … to significantly enhance our balance sheet,” said Jerry DeMuro, co-CEO of Eve Air Mobility, in the company’s third-quarter 2022 earnings call on Dec. 23. “And we’re doing that through a financing vehicle that is completely aligned with the core values of this business — reducing carbon emissions and sustainable, environmentally friendly transportation.”

Eve anticipates an annual cash burn of between $100 million and $150 million as it works to certify and ramp up production of its four-passenger, lift-plus-cruise aircraft.

But the company also emphasized the strength of its massive order backlog, which includes letters of intent (LOIs) for nearly 2,800 aircraft, and a reported value of more than $8 billion.

“We now have the largest order book in the industry,” DeMuro said. “We also have the most diversified order book.”

Eve’s major partners include United Airlines, which in September 2022 announced a conditional purchase agreement for 200 Eve aircraft, with an option for 200 more.

Later that month, Eve announced a strategic partnership with Blade India, which includes a non-binding purchase order for up to 200 aircraft.

Both United and Blade are also partners in Eve’s urban air traffic management (UATM) software platform, which it hopes to deploy in markets around the world.

“We continue to take a holistic approach,” DeMuro said. “Some of our clients are also investors in Eve, so their interests are completely aligned with UAM [urban air mobility] development.”

Eve reported a net loss of $36.7 million in the third quarter of 2022, driven by higher research and development (R&D) expenses and selling, general and administrative (SG&A) costs.

The company also expanded its employee base from 120 people in the same period last year to approximately 450 team members in Q3 2022. This includes workers contracted through a master service agreement (MSA) with Embraer.

MSA costs are included in Eve’s R&D and represent most of the quarter’s R&D expenses, the company said in its earning’s report. SG&A costs also increased due to growth in the number of direct employees at Eve, the company said.

Eve has access to Embraer engineers on an as-needed basis, and cites this flexibility as a key strategic advantage.

The company noted its BNEDS credit lines have 12-year maturity and an amortization grace period, an “ideal fit” that matches its cash-flow needs.

This would draw on Embraer’s certification experience with traditional fixed-wing aircraft and would aim to have its certification validated by regulators in the U.S. and Europe.

Eve said it began the certification process with ANAC in February 2022, and has also initiated the validation for type certification with the U.S. Federal Aviation Administration.

“We believe this puts Eve on a clear path to certification in multiple domains,” said André Stein, co-CEO of Eve.

The company has tentative plans to create an initial manufacturing facility in Brazil, likely co-located in an existing Embraer facility. Officials said they will build the facility on a “modular basis,” allowing them to scale economically.

Eve also carried out a simulation of its UAM platform in the third quarter of 2022, using conventional helicopters on routes between downtown Chicago and vertiports in the Chicago suburbs.

The simulation intended to stress-test Eve’s concept of operations for eVTOLs in a real urban environment, as well as create awareness for what may occur in the future.

Average travel time in the simulation was 15 minutes, compared with between one hour and 90 minutes in a car — depending on traffic — and one hour by train.

“The simulation gave us a glimpse of the most popular routes and times for commuters,” Stein said. “It should help operators optimize the fight schedules. “On top of that, you gather important information about the entire passenger journey — from the experience of purchasing tickets to flying. There are lessons to be learned for an entire ecosystem that’s helping to define our eVTOL, service and software portfolio.”

Tesla Investor Day slated for March 1. Here's what to expect