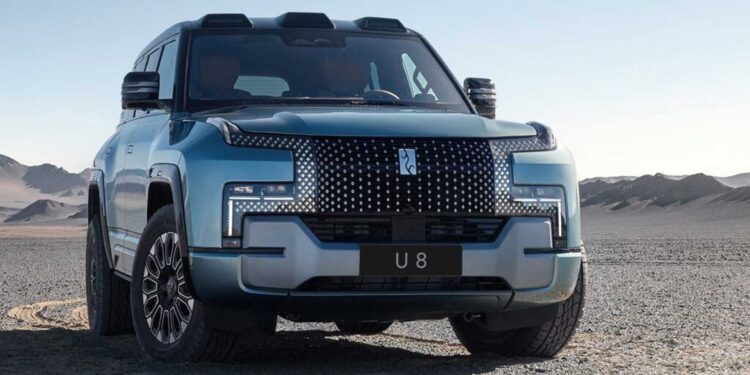 
BYD, the Chinese company that became the world’s largest plug-in vehicle maker in less than 20 years, launched a new car brand called YangWang, which aims to rival the likes of Mercedes-Benz, BMW, and Audi.

To show what it can do, YangWang unveiled a pair of luxury EVs – a rugged off-roader called U8, and a supercar that bears the name U9.

The YangWang U8 4×4 is built on a ladder frame chassis and comes equipped with four electric motors, one for each wheel, for an estimated total power output of over 1,100 horsepower and more than 1,200 pound-feet of torque.

The Chinese company didn’t offer any details about the battery or range, but it did say that the U8 features advanced torque vectoring and can accelerate from 0-62 mph (0-100 km/h) in 3 seconds.

Moreover, because it has a quad-motor setup, the company says it can do tank turns, just like the upcoming Mercedes-Benz EQG, has a crab mode (like the Hummer EV), plus a so-called floating water mode, which means it can effortlessly ford through water thanks to its waterproof and sealed body.

Another talking point is the SUV’s ability to keep driving at up to 75 mph (120 km/h) even if it has a flat tire, but the company stopped short of offering additional information, so we can only assume it will come with some sort of run-flat tires.

There are no images of the interior yet, and details about autonomous driving assistants are nonexistent, but some of the car’s measurements have been published. The electric SUV is 208.7 inches (5,300 millimeters) long and has a wheelbase of 120.1 inches (3,050 mm), which makes it around inches (508 mm) longer than a G-Class (depending on the German model’s trim level).

With an estimated starting price of around one million Yuan (around $145,000), the YangWang U8 is clearly aimed to rival top-tier SUVs like the Mercedes-Benz EQG and upcoming electric Land Rover Defender, and by the looks of it, it might just have a good shot at disturbing the status quo. In China, an internal combustion engine Mercedes G-Class starts from almost two million Yuan (around $275,000), double what the U8 is rumored to cost.

Moving on to the all-electric YangWang U9 supercar, all I can say is it’s a completely different animal than its brand stablemate, at least in terms of design. With its C-shaped front LED lights, low-slung figure, and center fin on its back, the U9 certainly looks like something to be reckoned with.

It uses the same Yisifang power system as the U8 SUV, so a quad-motor setup with up to 322 hp for each wheel, for a total output of 1,288 hp. With this much oomph, it’s said to accelerate to 62 mph (100 km/h) in just 2 seconds from a standstill, which would make it almost as quick as the Croatian-made Rimac Nevera, which sprints to 60 mph. in 1.85 seconds.

The price for the YangWang U9 hasn’t been announced yet, but during its reveal, the company presented it as a ‘million-yuan’ supercar, so expect a starting price of around $145,000.

There’s no word yet on the availability of both these new EVs outside of China, but I’d like to know what you think of them – if they somehow make it to the United States, would they have a chance against the luxury models offered by legacy automakers? Let us know in the comments below.