Car shows return to being in-person after industry struggles in 2022, following COVID-19 outbreak 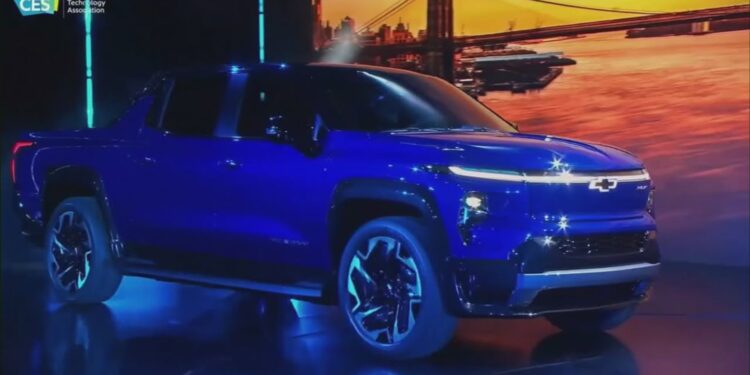 
2022 was a busy year for the car industry and marked the in-person return of numerous car shows, following the COVID-19 outbreak.

Carmakers also tried out new ways of launching vehicles – including General Motors, which presented its Chevrolet Silverado at CES, the well-known gadget show.

The big pickup truck, powered by electricity, will go on sale in 2023.

Traditional car shows were also back and in-person, notably the Paris Motor Show in October, which returned after a four-year hiatus.

French brands were present, but big international names chose to skip the event.

“Renault had a very good presence,” Mark Tisshaw, an editor at Autocar, said.

“They had all of the Renault Group brands there, but even Stellantis with French brands Peugeot, Citroen, and DS. It’s almost unimaginable that there’d be a Paris motor show without Citroen, but Citroen wasn’t there, leaving stands to Peugeot and DS, and it was all quite condensed into quite a small space. And if it wasn’t for some of the Chinese manufacturers who came over and had stands, I think it would have been a very, very quick motor show,” Tisshaw said.

Indeed, it was Asian manufacturers, like Ora, BYD, WEY and VinFast, that made up most of the show floor, in an attempt to seduce the European market.

They presented their limited-series models, most of which were EVs.

In the US, the Detroit Auto Show made a similar disappointing comeback a month earlier, with few car unveils.

One of the highlights of the show was the presentation of the new Ford Mustang, which will go on sale next summer, and may be the last gas-powered version of the muscle car.

Ford plans for half of its global production to be electric by 2030.

The electric transition also made its way to the luxury car segment, with Rolls Royce introducing its very first battery-powered model on Oct. 17.

The specifications for Spectre are yet to be confirmed as it enters its final phase of testing, but preliminary data reveals an expected range of 320 miles and acceleration of 0-60 mph in 4.4 seconds.

“What do you see here at the side of me is the Rolls-Royce Spectre, the very first full electric Rolls-Royce in history. A project we were working on for quite a while, as you can imagine. And we are now at a stage that we have the technology at our hands, for instance, to offer 520 kilometers range. That is exactly what Spectre can do,” Torsten Müller-tvs, CEO of Rolls-Royce, said.

The all-aluminum frame of Spectre integrates the battery into the car’s structure, allowing it to be 30% stiffer than any previous Rolls-Royce.

The day after this announcement, it’s in Taiwan that Foxtron, a joint venture of iPhone manufacturer Foxcon and Taiwanese carmaker Yulon Motor, unveiled two new cars.

It showed the new Model B prototype on stage, a five-seat hatchback comparable in size to Volkswagen’s ID 3 and designed by Italian design company Pininfarina.

The manufacturer says it can travel up to 440 miles on a single charge. No retail price was announced.

The other highlight of the conference was the unveiling of the new seven-seat Luxgen N7, an electric SUV based on the Model C prototype unveiled last year. The N7 will be sold from next year.

Another newcomer on the EV market is AEHRA, an Italian startup which plans to release an SUV and sedan from mid-2025, starting from $160,000.

It delivers up to 370 miles of tail pipe emission-free driving range on a single charge, according to the WLTP test cycle.

With numerous new EVs about to hit the market, attention was also drawn to infrastructure problems.

Americans, for example, who live in apartments without private garages are stringing extension cords across sidewalks to power up their cars, turning into a trip hazard for passing pedestrians.

“If we lived in a place where we could plug into the garage, we’d plug this right into the wall but because we don’t, this is where we plug into the extension cord,” Rebecca DeWhitt, EV owner and renter, said.

DeWhitt has to wait up to two days to fully-charge her new Hyundai Kona using her home outlet.

The other option is to drive to a nearby grocery store and wait for one of two fast-charging stations to become available.

In the UK, a superhub for EVs opened in July to address the issue.

Featuring 42 charging points with the latest technologies able to recharge an EV in less than half an hour.

It’s powered by a hybrid battery near Oxford, a combination of vanadium flow batteries – which provide less power output but have a long lifespan – and lithium-ion batteries, just like those found in laptops or electric vehicles.

They can provide ten-times the power output (50MWh) than the vanadium flow batteries, but like the battery in your smartphone, have a limited life span dependent on the number of charge/discharge cycles they undergo.

The electrification of mobility solutions also reached flying cars in 2022.

Looking more like a big drone, it’s one of dozens of flying car projects around the world.

Only a handful have been successfully tested with passengers on board, and it will likely be many years before any are put into service.

This demonstration took place with an empty cockpit, but the company says it carried out a manned flight test in July 2021.

These flying devices are now welcome at traditional car shows.

That included the ICON A5, a two-seat, amphibious, light-sport aircraft with retractable wings that enables owners to haul it in a trailer behind a truck, SUV or other vehicle.

But are flying cars truly the future of the industry?

“Honestly, I think this is the future of shows. It’s no longer just an auto show. It’s a mobility show, which gives you a glimpse of all of those vehicle types, including the ones that fly,” John George, Air Mobility Experience chief creative officer, said.

With that in mind, car afficionados didn’t shy away from classic cars either.

Slovakian company Engler revealed an unusual vehicle, the Engler Desat, a curious-looking hybrid machine that looks somewhere between a quad bike and a hyper car.

“Well, this is the Engler Desat. It’s the vehicle which has no global competitor. It’s so unique that we have to create our own category for it. And we call it super quad. So, this is super quad Engler Desat,” Engler Founder Viktor Engler explained.

You don’t need to wear a motorcycle helmet to drive the Desat because it’s technically classified as a car.

Production models will come with a three-point seatbelt system.

In London, another edition of the same show saw the presentations of the Morgan Super 3 by Morgan Motor Company, the Prodrive Hunter by Prodrive, the Ferrari Daytona SP3, and the Rolls-Royce Black Badge Ghost.

Copyright © 2022 by The Associated Press. All Rights Reserved.