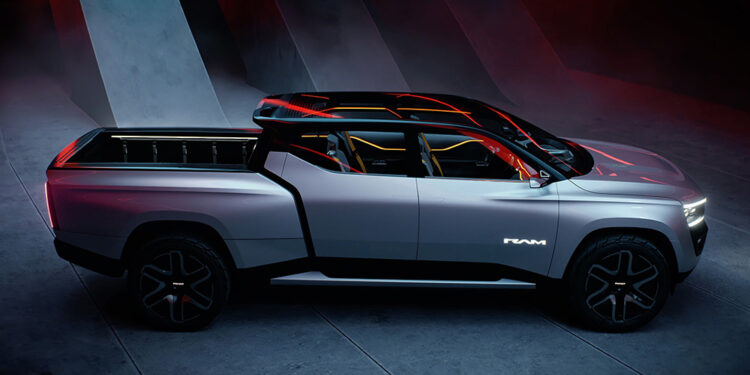 Ram Trucks, the US truck arm of global automaker Stellantis, took the wraps off what it called the Ram 1500 Revolution BEV Concept truck on Thursday at the Consumer Electronics Show in Las Vegas. The production version of this fully electric, full-size pickup truck will be revealed within months, with sales to start during 2024, most likely in the second half of the year.

Ram is the last of the three Detroit makers to unveil a battery-electric pickup truck: the Ford F-150 Lightning went into production last April, and sales of the Chevrolet Silverado EV are supposed to start this year. It’s built on the “STLA Frame” architecture, the largest of four different electric-vehicle platforms and the only one featuring body-on-frame construction.

Despite rumors of a plug-in hybrid powertrain, the Ram concept is powered only by a large battery pack—with “unofficial reports” suggesting two available battery capacities of 159 and 200 kilowatt-hours, according to InsideEVs. Ram says it can charge at 800 volts, claiming users could add 100 miles of range in 10 minutes (a carefully chosen statistic that assumes a largely depleted pack, optimum temperatures, and other ideal conditions).

Mike Koval, CEO of the Ram brand, spoke with Charged EVs but declined to provide or confirm any specifications for the new truck. The concept is a design exercise that previews future Ram trucks, he said, all of which will be ‘electrified’ by 2030—both light- and heavy-duty versions.

Koval said the 800-volt charging would be accompanied by more conventional 400-volt charging as well. But he demurred on the question of whether Ram used an 800-volt battery architecture or simply a pair of stacked 400-volt packs with a series/parallel switch to charge at 800 volts—which is the approach GM has taken to providing charging above 150 kilowatts for its Hummer EV and other trucks with very large packs.

Ram did say the concept was powered by two motors, one at each axle, and included air suspension with three height modes: ingress/egress, aero, and off-road. It will also have four-wheel steering, with the rear wheels able to angle up to 15 degrees, a feature first seen on electric trucks in the GMC Hummer EV launched last year.

But Koval hinted at further powertrain options to come. “The one thing our range-extended paradigm breaker will do is provide real-world range,” he said, to counter the low towing range of all current battery-electric pickups. He more explicitly confirmed a future plug-in hybrid option to Green Car Reports, so expect more news on a range extender in the coming months.

The U.S. arm of Stellantis (nee Fiat Chrysler) used performance to make the most out of an aging line of vehicles, putting its Hemi V-8 engine and various alluring exhaust notes into Dodges, Jeeps, and Ram pickups. So the upcoming electric Ram 1500 “of course will have white-knuckle performance,” Koval said, specifying both “acceleration and great driving dynamics,” the latter not necessarily a feature of any full-size pickup to date.

That “white-knuckle” descriptor may apply only to higher-end models. Over time, Koval said, the Ram 1500 EV lineup will echo the trim options of the current Ram gasoline models, from Tradesman work trucks all the way up to the Longhorn ultra-luxury trim. Extreme acceleration is not necessarily what fleet-truck buyers want to offer their drivers, so expect the low-end, white-painted electric Ram trucks to offer more sedate performance.

All of them should stand out in design, though. Unlike the smooth flanks of Ford’s F-150 Lightning, the rear fenders of the Ram REVolution concept bulge out from the body and carve deeply into the back end of the cab. They will accommodate tires up to 35 inches, Ram says; the concept truck rides on 24-inch wheels. The front end pioneers a new face for the Ram brand, with twin “tuning fork” headlights flanking the R-A-M logo that wrap around the corners of a front end that appears visually lower than past upright Ram designs.

Like a Rolls-Royce, the concept truck has what Ram calls “saloon style” doors that open from either end of the cab (the rear doors are rear-hinged) to eliminate the center pillar and open the entire cab side for access. It seems unlikely this feature will survive into production trucks, though it’s not outside the bounds of possibility. That said, reports suggest the shape and exterior design of the truck are fairly close to the production version to be unveiled within a few months.

Inside, the concept has a pair of touchscreens—totaling up to 28 inches of display—with very few hard control knobs. The old mantra of being able to operate pickup truck controls while wearing work gloves doesn’t appear remotely compatible with the new, streamlined, all-digital interior.

We’d expect a simpler, smaller screen with more conventional controls in at least the Tradesman versions of the electric Ram, when they arrive. Those work-truck versions may also forgo some of the powered features of the concept truck, which include the door handles, tailgate, charge-port door, side steps, and rear steps. Those are a lot of electric motors that can be eliminated to cut prices for cost-conscious fleet managers.

Storing 18’ lumber inside the truck

Like Chevy’s Silverado EV (and its spiritual predecessor the Chevrolet Avalanche), the Ram concept truck has a folding “mid-gate” in the back of the cab, behind the rear seat, that lets owners use the back half of the cabin as an extension of the cargo bed, boosting storage space considerably.

Because the cabin is 4 inches longer than the current Ram, courtesy of space saved by a shorter nose, the midgate can have a pair of jump seats in addition to the second row seats. They can be mounted inside the cabin or in the bed, evoking shades of the Subaru BRAT of 40 years ago.

But Ram has included a feature that one-ups both the F-150 Lightning (with its lockable “Mega Power Frunk”) and the Silverado EV’s midgate. The concept truck can store lumber up to 18 feet long entirely inside the truck, courtesy of not only the midgate, but a removable center console and a second opening, in the toeboard, that gives a flat surface from the bed all the way into the front trunk. That’s a feature previously seen only on prototype Bollinger EV pickup trucks, and it should wow truck buyers who have had to hang long lumber out the backs of their truck beds.

Ram also used CES to show a new inductive robotic charger (cutely called ‘Ram Charger’) that it says will observe an EV’s presence, detect its state of charge, and move itself into position under the vehicle.