Florida Is Fueling Its EV Charging With Federal Funds 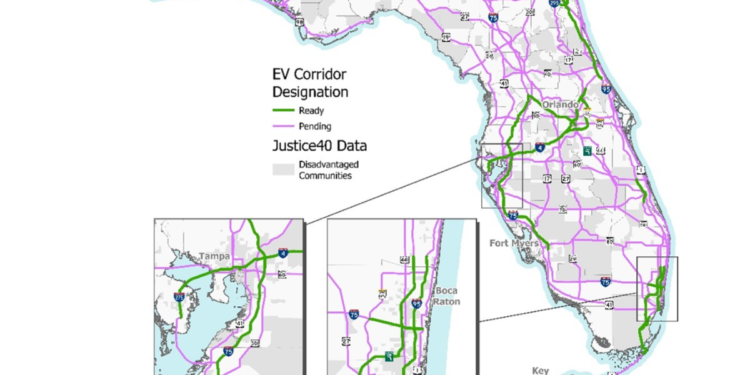 It’s interesting that so many federal fiscal benefits are coming to Florida — as its two senators wanted nothing to do with the legislation behind the funding that’s making it all possible.

The Inflation Reduction Act of 2022 (IRA) was a federal bill signed into law by President Joe Biden (D) in August, 2022, primarily addressing climate change. The House voted 220–207 to pass the IRA. All 220 Democrats voted yes. 207 Republicans voted no. 4 Republicans did not vote. The Senate voted 51–50 to pass the bill. All 48 Democrats and the two Independents who caucus with Democrats voted yes. Vice President Kamala Harris (D) cast a tie-breaking vote in favor of passage. All 50 Republicans voted no.

Elizabeth Gregory, communications director for Marco Rubio’s Senate campaign, said in response to passage of the IRA, “This bill will do nothing to reduce costs of living.” Senator Rick Scott declared of the IRA, “Drivers lost because Dems just raised gas taxes.”

The Bipartisan Infrastructure Law includes a $7.5-billion budget to help deploy 500,000 EV chargers throughout the US. The Biden–Harris Administration announced in September, 2022, that more than two-thirds of Electric Vehicle (EV) Infrastructure Deployment Plans from states, the District of Columbia, and Puerto Rico had been approved ahead of schedule under the NEVI Formula Program.

The law provided $1.1 billion to protect and restore the Everglades in South Florida; Senator Scott visited the region to celebrate the investment. “It was good to be with the Army Corps and our strong local leaders today to see the great progress being made at the Herbert Hoover Dike,” he said, adding that he was “proud that Senator Rubio and I were able to help secure an unprecedented $1 billion for Everglades restoration, the largest single amount ever allocated by the federal government.”

There’s just one problem here. Scott didn’t vote for the Bipartisan Infrastructure Law that’s funding the Everglades project, nor did Rubio — although they both have shared the credit.

Despite voting against — and working to undermine — both laws, many Republicans are starting to see the advantages of the landmark climate law in their districts — and trying to claim credit for them.

In recent months, companies have announced tens of billions of dollars of investment in clean energy, battery, and EV projects that will benefit from incentives in the law. About two-thirds of these projects are in districts represented by Republican lawmakers who opposed the bill, according to a Politico analysis.

How Is Florida Expected to Embrace EVs?

In the past 15 months, Florida has seen an 87% increase in EV registrations, placing it behind only California nationally in new battery powered automobiles. (I’m one of those fairly recent Florida EV buyers.)

In FDOT’s first update on Florida’s EV plans since September, 2021, Trey Tillander, executive director of transportation technologies for the FDOT, told members of the Senate Committee on Transportation last week that EVs could account for between 10% and 35% of all vehicles owned in the state by 2040. The figure is based on an analysis the department conducted of market and advanced automotive tech models.

“As the EV adoption rate grows, the vision is to develop a statewide network of convenient, reliable, and accessible EV charging infrastructure (supplying) both long-range and short-range travel,” he said.

FDOT’s plan to build out Florida’s EV charging infrastructure and funding is a result of the Bipartisan Infrastructure Framework — Florida is getting at least $198 million in federal funds to increase its statewide inventory of EV charging stations.

The FDOT, local governments, and Native American tribes will also be able to seek apportionments from a separate $2.5 billion discretionary grant program that is “still pending guidance” from the Joint Office on Energy and Transportation. FDOT anticipates the first round of funds, distributed as grants, to go live this year.

The NEVI program will assist the FDOT over 5 years to address EV charging needs for passenger vehicles and light duty trucks. Funds may be used to purchase and install EV charging infrastructure, operating expenses, purchase and installation of traffic control devices located in the right-of-way, on-premises signage, development activities, and mapping and analysis activities.

Criteria that will weigh into FDOT’s grant distribution of NEVI funds include electric power distribution readiness, the availability of amenities provided at each site, and how resilient proposed projects will be.

Important requirements and considerations raised in the guidance include:

FDOT will target interstate gaps in EV charging facilities first, including 15 such gaps mostly along the Gulf Coast in Lee and Sarasota counties; Hillsborough and Polk counties nearer to Central Florida; and across Leon, Madison, and Hamilton counties in the Panhandle.

Planners will also prioritize “critical evacuation routes” statewide, Tillander revealed. “This first phase is an opportunity for us to recognize and learn lessons and incorporate those into the subsequent phases.”  The current plan also envisions FDOT turning over the stations to local entities rather than maintaining and operating them all itself. FDOT plans to hold a “clear and competitive” selection process for companies to build EV infrastructure and distribute funds through a request-for-applications process that will allow for multiple applications at multiple sites to be evaluated concurrently.

“To me, a road’s a road,” DeSantis told Fox News host Tucker Carlson in November, 2021.