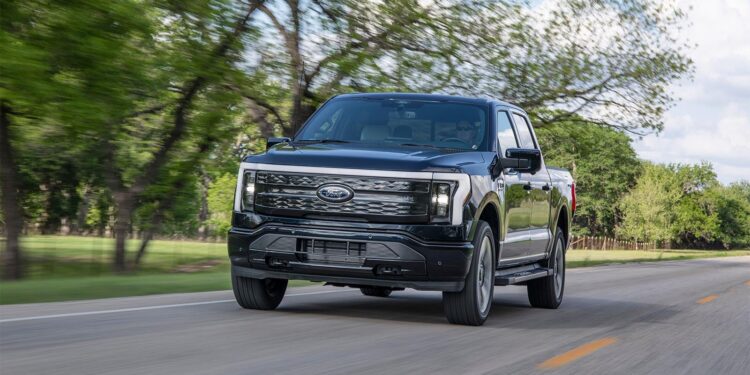 
If there was any doubt about Ford Motor Co.’s commitment to the all-electric F-150 Lightning EV, it can be pushed aside now — the second-generation model is set to arrive in Fall 2025.

According to AutoForecast Solutions, production of the next-gen full-size electric pickup is slated to begin mid-August 2025. The two generations of pickups will overlap each other for about four months with production of the original model ending Dec. 24, 2025.

Ford will have a second version of the F-150 Lightning before many automakers have a full-year of production of their first models, including top competitor Ram and potentially, Tesla. The Cybertruck is slated to begin production in the final quarter of this year, but it’s been delayed a few times already so it’s possible it could be lapped by Ford as well.

Also, other competitors like General Motors and Rivian haven’t announced plans for a second-generation model yet either, and neither is likely to in the near term. Ford’s second-gen F-150 Lightning may not be the second electric pickup on the road in 2025.

CEO Jim Farley pushed hard for the F-150 Lightning telling reporters during its debut outside Ford World Headquarters in Dearborn in May 2021 the truck would be a “referendum” with the public about the acceptance of electric vehicles.

Now it seems the company is going to expand the line-up with a second all-electric pickup. However, no one is quite certain if it’ll be the Maverick, which already comes in hybrid form, or the midsize Ranger.

Farley confirmed the company will add at least one other electric pickup around mid-decade. The company certainly will have the capacity to add another all-electric pickup once it completes the new 5 square-mile BlueOval City just outside Memphis in 2026.

It will focus exclusively on EV trucks, including both the second-generation Lightning and at least one other model. As the single most expensive project in Ford’s history, the automaker has to hope that it can convince buyers to make the switch from gas and diesel to battery power.

The company has plenty of room for its current all-electric pickup. Ford initially tooled up its dedicated Lightning factory in Dearborn, Michigan to produce about 25,000 of the trucks annually. It has had “knock down the walls,” said EV program chief Darren Palmer, and retool for 150,000 trucks, a run rate Ford hopes to reach by the end of 2023, he told TheDetroitBureau.com.

Ford CEO Jim Farley has committed billions of dollars to finance the automaker’s shift, laying outa target of producing 2 million battery-electric vehicles annually by late 2026. The automaker introduced its first long-range BEV, the Mustang Mach-E, in 2021, rolling out a second, the Lightning, this past spring. They already have positioned Ford as the second best-selling manufacturer in the U.S. BEV market, behind Tesla.

The automaker previously confirmed a number of other all-electric models are in the works, including the second pickup set to be assembled in BlueOval City.

The automaker is taking a multi-pronged approach as it gears up for the switch to electric propulsion. It’s not only rolled out its first two long-range BEVs but, earlier this year, announced a major corporate transformation. The company was effectively cleaved into two halves, one focusing on vehicles using internal combustion engines, Ford Blue, while the other is all-electric, Ford Model e.