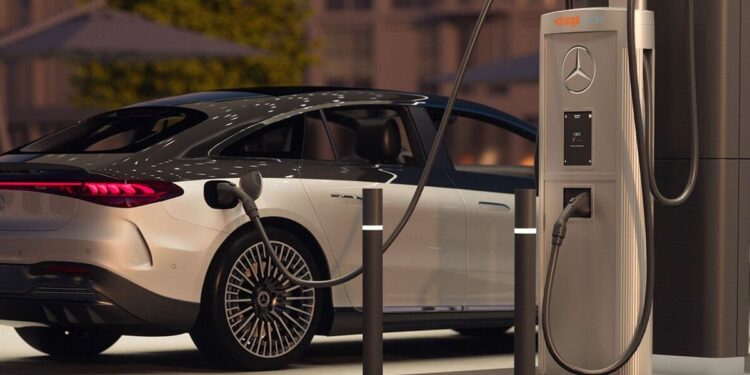 
With petrol-powered cars being banned from sale in the UK from 2030 the future is clearly electric. Although battery-powered vehicles are now just as impressive as their gas-guzzling siblings there remains one massive problem with owning one as the charging infrastructure across Britain is woefully inadequate. It’s a massive headache for EV owners as there simply aren’t enough fast chargers in towns, cities and motorways service stations to cope with the ever-increasing demand.

Express.co.uk recently discovered just how bad things are when we went fully electric on a 1,000 mile road trip from London to The Lakes. The UK government says it will invest £1.6 billion to help boost the country’s network with 300,000 points expected to be live by 2030 but one car company clearly feels that’s still not enough.

Mercedes is hoping that it can make going electric appear far more attractive by launching its very own charging network.

These Mercedes-branded refilling stations will be popping up all over the planet with the German firm saying it will make them inviting places to visit thanks to the addition of shops and toilets.

They will also be covered by a roof so EV owners won’t get wet when refilling and all will be equipped with lighting and security cameras to help make time spent charging feel a lot safer.

READ MORE: BMW’s eye-catching new car lets you change its colour with a touch of a button

Perhaps the biggest bonus of stopping at these charging stations is the speed at which they will boost the batteries. Mercedes is promising that it will include 350kWh power which should take things from 10 to 80 percent in under 30 minutes.

Most current chargers in supermarket car parks only offer 50kWh charging which means stopping at Mercedes should be around six times fasters.

The new areas will be open to all EV owners although Mercedes drivers will get the benefit of being able to reserve a space via a tap on the in-car display so there won’t be a wait when they arrive.

The cars will even be able to automatically adjust the time of arrival depending on local traffic. Plans for the high-power charging network will start in the US this year with Europe following soon after.

Mercedes hopes that by launching this new service it will kickstart more companies to do the same.

“At Mercedes-Benz, we’re fully committed to making the charging of battery electric-vehicles easier and more accessible.”