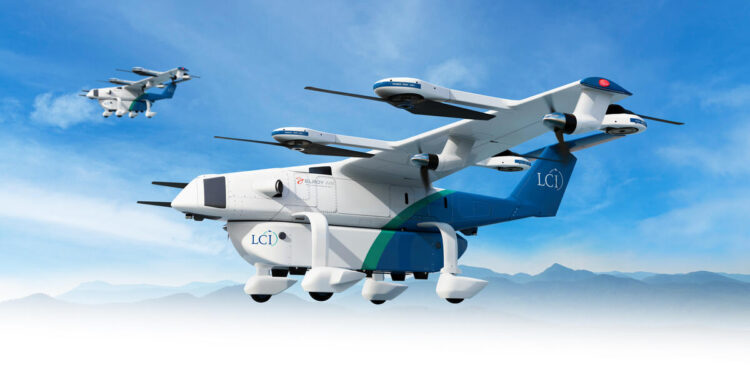 
Leasing group LCI has agreed to add up to 40 of Elroy Air’s Chaparral autonomous eVTOL aircraft to its lease portfolio. Under the firm order announced on January 11, the Ireland-based company has paid an undisclosed deposit to acquire 20 examples of the vehicle, with options for another 20.

LCI sees the hybrid-electric Chaparral—which will have a payload of around 500 pounds and a range of 300 nm—being used for cargo delivery, as well as applications including disaster relief, firefighting, and humanitarian operations. The design features a cargo pod installed beneath the fuselage.

According to LCI, the eVTOL vehicle will complement its existing fleet of helicopters and fixed-wing aircraft. The announcement did not confirm a projected date for first deliveries to the lessor, but California-based Elroy Air has previously said that it aims to have the Chaparral certified under FAA’s Special Class 21.17 (b) rules and ready to start commercial operations by the end of 2023 with civil launch customer Bristow, which in July 2022 provisionally agreed to add 100 eVTOLs to its mainly rotorcraft fleet.

The California-based start-up says it now has a backlog of orders for 900 aircraft with a combined value of more than $2 billion. That figure implies a unit price per aircraft of around $2.2 million, which would value the deal with LCI at just over $88 million.

“We are experiencing an enthusiastic response to the Chapparal and its capabilities to serve as a key part of a safe, efficient, and capable fleet of aircraft to respond in emergency situations, keep pilots out of harm’s way, and enable rapid logistics in a new and sustainable way,” said Elroy Air co-founder and CEO David Merrill. “Through our agreement with LCI, the Chaparral will be available for financing, enabling much broader access to the aircraft.”

While it is being designed to fly autonomously, the Chapparal can also be piloted remotely if necessary to comply with local aviation authorities. Its design features a high wing with eight vertical lift rotors and four forward-facing propellers for cruise flight. A 150-kilowatt gas turbine will generate power for the propulsion system and charge the battery during flight, eliminating the downtime otherwise needed to recharge batteries between flights.

LCI is part of the Libra Group, which has subsidiaries owning and operating assets in around 60 countries worldwide. It says it plans to share commercial, financial, and end-user expertise with Elroy Air, whose financial backers include Lockheed Martin.

“This commitment for the pioneering Chaparral system will enable us to efficiently support mission-critical remote logistical work and socially responsible humanitarian efforts around the world,” said LCI’s CEO, Jaspal Jandu. “This forms part of our wider advanced air mobility strategy and will strengthen LCI’s position as the leading provider of leasing, financing, and investing solutions for this new and exciting market.”

In April 2022, LCI placed deposits to buy up to 125 of Beta Technologies’ Alia 250 eVTOL aircraft. That piloted all-electric vehicle will carry five passengers or 1,400 pounds of freight up to 250 nm.