Maker of Flying Electric ‘Cars’ Prepares for Take Off 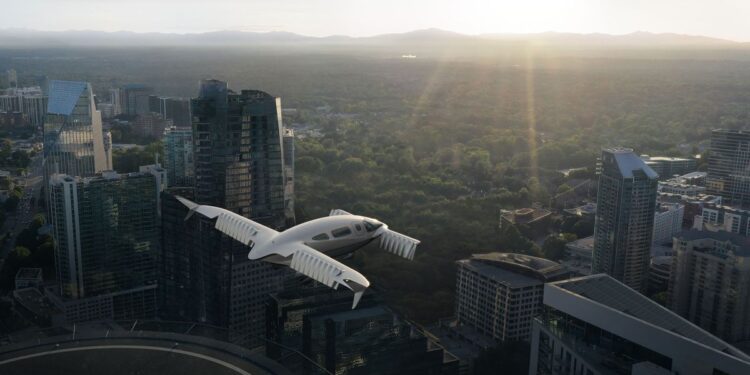 Lilium is one that still sees a future with flying electric cars—or eVTOL as this startup industry is generally referred to—and has just revealed it has raised an additional $119 million from new investors, strategic partners, and existing shareholders, with some big names behind the funding round including Honeywell, Lightrock, Tencent, and Aciturri.

“These proceeds are expected to strengthen our balance sheet and advance our commercialization efforts including signing of customer agreements with pre-delivery payments, reaching an agreement with EASA on our Means of Compliance, and commencing assembly of the type-conforming aircraft for the final manned flight test campaign,” CEO Klaus Roewe said.

Lilium’s vision of an electric VTOL future is still firmly focused on using a large number of small jets in front, with rear wings that can pivot downward to achieve vertical flight and then transition to horizontal flight once at a suitable altitude. This makes it different from a whole number of other eVTOL startups that have embraced the scaled-up drone aesthetic with a large number of open propellers for vertical flight.

“The proprietary technology at the core of the Lilium Jet is Ducted Electric Vectored Thrust (DEVT) which we have refined through successive generations of aircraft demonstrators,” Lilium says. “Electric jet engines integrated into the wing flaps provide advantages in payload, aerodynamic efficiency and a lower noise profile, whilst also providing thrust vector control to maneuver the Lilium Jet through every phase of flight.”

Lilium’s vision of eVTOL is also quite a bit more expensive than the multi-prop route, given all those jet engines. And instead of looking like an oversized toy drone, it has the feel of a vehicle you might find in a sci-fi film. And the company’s jets rely on a single “stage” rotor/stator setup, instead of multiple rotors like in a commercial jet engine.

The interior, meanwhile, is envisioned in several different configurations, including a four-seat conference seating setup for passengers—the VIP version really—or a six-seat layout geared to carry more passengers. A cargo version is envisioned as well.

The promise of luxury eVTOL commuting has certainly caught the interest of several companies, like Saudi Arabia’s national airline, which has ordered a number of craft from Lilium for short routes.

There will certainly be a VIP market for such electric competitors to helicopters, but that’s a niche market in itself, one that’s been growing and fueling some of the enthusiasm about such machines, especially in the Middle East and China, where demand could be greatest.

A couple of months ago Lilium revealed that Saudi Arabia’s national airline has plans to purchase 100 Lilium Jets, as part of an eVTOL network across Saudi Arabia. The airline plans to use the Lilium eVTOL craft for point-to-point connections as well as for feeder connections to the airline’s hubs for its business class passengers. No doubt quite a few private customers in Saudi Arabia will also become interested in purchasing Lilium Jets.

Speaking of purchases and production, Lilium plans to build 25 units of the Jet next year, followed by 250 the following year. So the company’s dream of an eVTOL future is rapidly approaching a moment of truth.

A couple months ago, the company carried out a full-scale demo flight with the smaller Phoenix 2 air taxi, transitioning from vertical to horizontal flight and reaching a speed of about 112 mph during the test. Now, Lilium faces the challenge of certification in various countries, and well as the start of small-volume production—one of the most financially precarious times in the lives of innovative mobility startups.

Will eVTOL go mainstream in this decade after several hundred units enter service, or will it remain a niche form of transport? Let us know in the comments below.

Jay Ramey
Jay Ramey grew up around very strange European cars, and instead of seeking out something reliable and comfortable for his own personal use he has been drawn to the more adventurous side of the dependability spectrum.