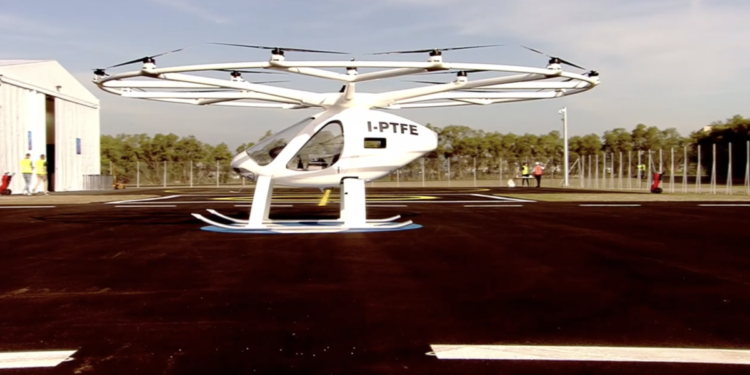 The four companies have been working on the project for 12 months, starting after Volocopter first showcased its eVTOL aircraft in the Italian capital. The aircraft flew at 40 km/h at an altitude of 40 meters (131 feet), flying a figure-eight formation in front of invited guests in a demonstration that was approved by Italy’s ENAC civil aviation authority and ENAV air traffic control agency.

UrbanV, which is in charge of the new vertiport at Fiumicino, was established last year as a joint venture between ADR and Italian airports Venice and Bologna, along with France’s Nice Cote d’Azur airport. The partners aim to develop vertiports worldwide, starting with a network around the Italian capital. ADR is also working with Italian aerospace group Leonardo.

The Rome vertiport occupies around 5,500 sq m (194,000 sq ft) and is based on a design that the developers believe is consistent with the envisaged standard template for other eVTOL operating bases. It includes a final approach and takeoff area, a parking area, a covered hangar measuring 20 by 20 by six meters, as well as an office, a warehouse, and an area for charging batteries.

As part of the ongoing operational trials with the new Rome facility, Volocopter has deployed its VoloIQ digital platform, which will be used for managing all aspects of eVTOL air taxi operations. The system will be the main customer interface for booking flights in Volocopter’s aircraft, as well as for flight crew and operational support teams.

“This test vertiport is particularly significant for UrbanV, representing our first step towards establishing a network of vertiports in the Rome region,” said UrbanV CEO Carlo Tursi. “In close synergy with all our partners in this new mobility ecosystem, we are making progress towards positioning Rome as one of the first European cities to offer seamless connections with electric aircraft, leveraging the expertise we have developed in designing and building ground infrastructure for advanced air mobility.”

Volocopter has been using the 2X aircraft for development work on its VoloCity two-seat production aircraft as well as for other operational flight trials in locations including Paris, South Korea, and Singapore. It is also working on a larger, longer-range model called the VoloConnect.

Maker of Flying Electric ‘Cars’ Prepares for Take Off