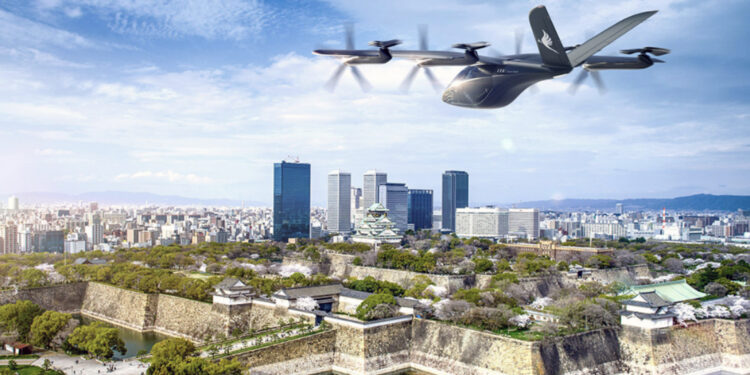 
Akihabara News (Tokyo) — Marubeni Corporation has put its money where its mouth is, making a pre-delivery payment for 25 eVTOLs produced by UK-based Vertical Aerospace.

Back in September 2021 the two firms announced their alliance within the Japan market, with Marubeni making a conditional preorder for up to two hundred VX4 eVTOLs, which Vertical is in the process of developing and licensing.

It was suggested at the time that this partnership might make possible flights between Tokyo Station and Narita Airport with only fourteen minutes of flight time.

More recently, however, their attention seems to be focusing more on Osaka, where the local government is actively promoting the future air taxi industry, and is aiming to lead the rest of the nation in regard to this new form of transportation.

In this connection, Marubeni has been conducting proof-of-concept demonstration trials in preparation for the 2025 World Expo in Osaka. This has involved helicopter flights between Osaka and Wakayama in order to test market conditions and to prepare the public for future eVTOL services in the Kansai region.

As for the payment which Marubeni has just made, senior executive Satoshi Takechi explained: “I am confident that our continued joint efforts with Vertical Aerospace, such as evaluating the requirements for eVTOL operations… will accelerate the development of the advanced air mobility market in Japan.”

Stephen Fitzpatrick, Vertical Aerospace Founder and CEO, added, “We are delighted to have reached the next milestone in our partnership with Marubeni. Japan is a wonderful country which is embracing the promise of eVTOL, as it will connect cities and regions like never before. We look forward to our joint efforts to build the ecosystem for zero-emissions travel in Japan.”

For Vertical, this was the first time that a customer in Asia made a pre-delivery payment.

The VX4 is a relatively large fixed-wing eVTOL which has the capacity to carry a pilot and four passengers. Its flight range is expected to be about 160 kilometers.

From Helicopters to Flying Cars