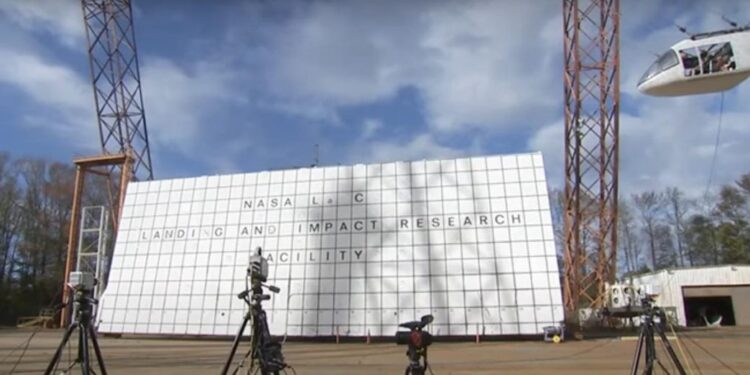 
As Advanced Air Mobility (AAM) concepts creep toward reality, NASA is developing computational structural models to help eVTOL makers analyze and forecast performance of the structures they propose to fly passengers in. A physical drop-test NASA performed shortly before Christmas showed some work is needed to validate models for AAM aircraft.

Carried out at NASA’s Langley Research Center in Hampton, Virginia, the test saw a “Lift+Cruise” test article (constructed in conjunction with the Agency’s Revolutionary Vertical Lift Technology – RVLT project) released in a swing-like fixture which free-fell from about 30 feet, simulating a level, forward-travel emergency landing.

As can be seen in the test video, the full-scale six-passenger AAM test cabin impacts the pavement and skids in the direction of its drop vector for about 20 feet, rotating slightly counter-clockwise. The structure does not bounce but the roof aft of the forward cabin collapses onto four dummy passengers in the rear.

The test article was not representative of any particular AAM cabin design, rather a generalized structure instrumented for the purposes of helping fill out data for digital modeling techniques. Crucially, NASA designed and incorporated an overhead-mass to represent the wing structure, rotor and battery locations common to many AAM designs.

Joby’s AAM – now going through the FAA’s type certification process – is a good example. Its wing box, which supports its four forward, tilt-nacelle electric motors, rotors, and wing is directly above the cabin. Theoretically, the structure must both support the weight of these components, other subsystems and aerodynamic loading/flex the wing experiences during takeoff, flight (vertical/cruise) and landing.

In its press release, NASA acknowledged that, “There are many other overhead-mass configurations which may behave differently in a crash.”

“When looking at crash conditions for these types of vehicles, it’s important to note the structural weight and distribution that must be made when examining a specific design,” said Justin Littell, research assistant for Langley’s Structural Dynamics Branch.

In this case, the test article’s roof could not hold the representative weight on impact. NASA explained that its team was looking at two primary events; The first was the dynamic performance of the cabin floor and seat-stroking (vertical movement and energy absorption of the passenger seats). The cabin subfloor and energy absorbing seats functioned as intended and limited the effect of the impact on the crash test dummies according to NASA but the roof was a different matter.

“Our computational pretest models did a good job predicting the composite deformation until overhead structural failure,” Littell maintained. “However, the computational models did not predict the overall [roof] collapse as seen in the test.”

NASA says the effect of the overhead structure collapse on the crash test dummies (i.e potential injury) is still being determined. The test cabin included several seat configurations including an experimental NASA energy absorbing concept, various sizes of crash test dummies to study the effects of the crash loads on all sizes of occupants, and a modular NASA-developed energy-absorbing composite subfloor.

While the roof collapse was not expected, the test team considers the experiment a highly worthwhile data driver for future simulation models. “We successfully tested the eVTOL vehicle concept representing a six-passenger, high wing, overhead mass, multiple rotor vehicle, obtaining more than 200 channels of data, and collecting over 20 onboard and off-board camera views.”

NASA’s crash test team will crunch through all that data in the coming months. It’s likely that it will share the data and the development parameters of its digital model with a variety of AAM makers. Companies like Joby already have their own modeling and simulation regimes – including structural modeling/analytics – but they will no doubt be eager to pour over the data and any insights gleaned from NASA’s test.

NASA confirmed that the data will likewise be used as the basis for evaluating potential test conditions and configurations that will be used during a drop test of a second Lift+Cruise test article. That test is tentatively scheduled for late this year. As with the December test, the associated video will be compulsory viewing for the AAM community.