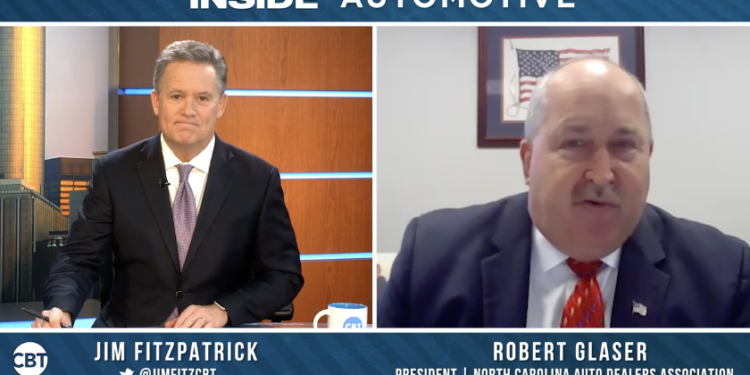 
Many dealers are particularly concerned with where the industry is headed. On today’s episode of Inside Automotive, Robert Glaser, President of the North Carolina Automobile Dealers Association, discusses what’s leading his Association’s agenda in this new year.

Although 2022 has seen several difficulties, according to Glaser, “inventory was the biggest…Dealers can’t sell what they don’t have,” he adds. Dealers persevered in their support of their neighborhood and civic organization despite the challenges and ultimately came together. For dealers, it boiled down to selling whatever the customer desired. According to Glaser, “they probably won’t go back to the stacking deep and selling cheap technique, but they will continue to be at the forefront when it comes to meeting the transportation demands of their consumers.”

In North Carolina, however, the association is handling Ford’s EV charging program. The program highlights Ford’s efforts to launch a forceful EV program that “violates the franchise legislation.” Glaser claims that dealers want to ensure Ford complies with the state requirements implemented in several states.

In Glaser’s opinion, the EV agreement entails much more than simply installing EV charging stations in front of Ford dealerships. It deals with the procedures and applications that car dealers must use to sell cars. However, the problem with the EV charging program is that dealers like to maintain their independence from micromanagement when selling vehicles.

Ford asserted that two-thirds of its dealer base is implementing the initiative. Yet, a poll conducted in December by NCADA, revealed that the state is not far off those figures. However, dealers believe that by refusing to participate in the voluntary EV charging program, they are lowering the franchise’s value. No customer, according to Glaser, “will stop in front of a dealer to charge when they could go a mile further to their local Starbucks or Target to do so.”

On the other hand, Glaser has stated for NCADA that North Carolina is well-recognized for its pickup trucks on the roads. “Perhaps we won’t reach the 12% of EV sales, but there will be more EV drivers here,” For Example, less than 1% of new electric vehicle purchases occurred in 2020, 2.5% occurred in 2021, and 3.5% occurred in 2022, so we are on the way there.

According to Glaser, the used car market, overhead costs, and good personnel are the most crucial things for dealers to keep in mind because those will be their biggest assets. Dealers must also aggressively manage these factors to prevent losses. Glaser adds, “Over the past 28 years, I have seen dealers be resilient, encouraging, and they will survive what is to come.”

Did you enjoy this interview? Please share your thoughts, comments, or questions regarding this topic by connecting with us at newsroom@cbtnews.com.

While you’re here, don’t forget to subscribe to our email newsletter for all the latest auto industry news from CBT News.