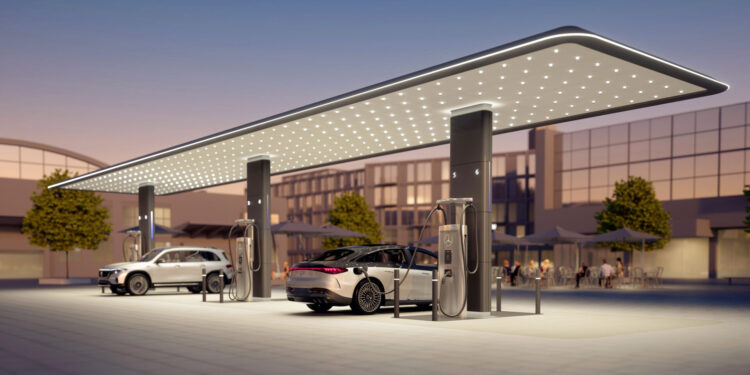 Mercedes-Benz parent company, Daimler AG, once bought an equity stake in the EV start-up Tesla around the time the company was just starting to produce its first car, the Roadster. Mercedes sold its share not too long after, just after Tesla’s first full car, the Model S, hit the market and long before Tesla become acknowledged as the world-leading EV producer it’s now known as.

But they were there to experience a key factor that helped lock in the initial popularity of the Tesla—a fast charging network exclusive to the car with chargers free and located in towns with many Teslas and along the key routes between them, such as LA to SF.

Now Mercedes is spending the majority of its $43 billion electrification push to launch its own line of electric models. Four are on the market now—the large EQS sedan, midsize EQE sedan, large EQS SUV and compact EQB SUV. More are coming—at least two this year as they march forward electrifying the entire fleet. At this critical juncture, tearing a page from the Tesla playbook, Mercedes has decided to launch its own proprietary network of fast chargers.

While the new Mercedes $1.05 billion North American charging network is a clear emulation of Tesla’s Supercharging system, it also has some distinct differences. Because Mercedes’ EQ models don’t have a proprietary charging plug like Tesla, they can easily charge at non-Mercedes chargers like those from Electrify America or EVgo. For the same reason, non-Mercedes EVs, including Teslas with adapters, will be able to use the Mercedes network.

That sounds like the exclusivity that helped build Tesla’s reputation and is definitely part of the Mercedes mystique, may be a bit more difficult to define when it comes to charging. When built out in 2027, the U.S. network will have 400 stations on highways, major intersections and large cities with more than 2,500 high-power plugs. The charging stations will include food outlets and restrooms nearby along with safety equipment to provide security.

To give Mercedes’ drivers some exclusivity, they will be the able to reserve a charging spot. All stations will having photovoltaic roof systems, draw on “green” electricity and have up to 30 350-kilowatt chargers. The chargers should be able to add 30 miles of range per minute. Mercedes also plans to roll out sites in North America, Europe and China simultaneously. The network will be built by partners ChargePoint and solar energy company MN8.

“We are progressing. We have moved extremely fast, lightning fast, in a couple of months to get this all done and sealed and all the contracts in place,” Mercedes’ head of research and development Markus Schäfer told the CES audience. “The plan is to open the first sites this year.”

Mercedes also said it has been certified for Level 3 autonomous driving in Nevada and it expects approval in California soon. In Level 3 autonomous driving the car handles most of driving aspects, but the driver is responsible for taking control at all times. Unlike Level 2 (which is what many adaptive cruise control systems offer), the driver can take his or her hands off the wheel. Tesla has promoted its Full Self Driving package for some time, although it has yet to be fully activated or approved by state authorities.

Finally, Mercedes-Benz brought some eye candy to the CES floor with its EQXX concept car. Billed as the most efficient car Mercedes has ever built, it has travelled more than 745 miles on a single charge (It’s nominal range is 620 miles), consuming 8.3 kilowatt-hours per 100 kilometers (or 7.5 miles per kilowatt-hour). The drag coefficient of the lightweight car is a dramatic 0.17. The Mercedes Formula 1 team lent its expertise to the multidisciplinary team that developed the EQXX.

An Electric rEVolution | The Future of EVs | Kopernik FNL