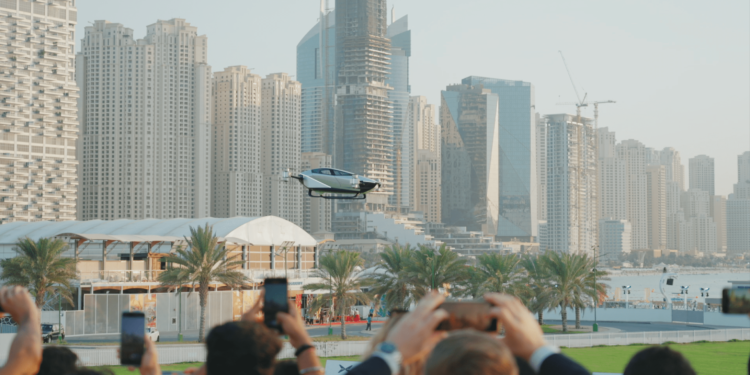 One of the flights took place at Leonardo da Vinci International Airport near Rome and was a collaboration among German eVTOL maker Volocopter, the Roman airport authority and mobility infrastructure companies UrbanV and Atlantia.

According to airport officials, a test pilot flew the Volocopter 2X aircraft at a speed of 40 kilometers per hour, or about 21 knots for five minutes at an altitude of about 131 feet.

The flight was also a test of a prototype vertiport constructed at the airport for testing the possibilities of eVTOL infrastructure. The demonstration was part of a plan to use eVTOLs as air taxis between the airport and parts of the city by 2024.

The demonstration flight in Dubai was organized by the Dubai International Chamber and Chinese eVTOL maker XPeng.

After taking off, the XPeng X2 two-seat aircraft flew for about 90 seconds. The company says the X2 can fly at up to 130 kilometers per hour, or about 70 knots and has autonomous flight capability. The company says the flight “marks an exciting new era of short-haul flights and intelligent mobility solutions.”

Tesla owners give back to local communities for the Holidays

Tesla owners give back to local communities for the Holidays