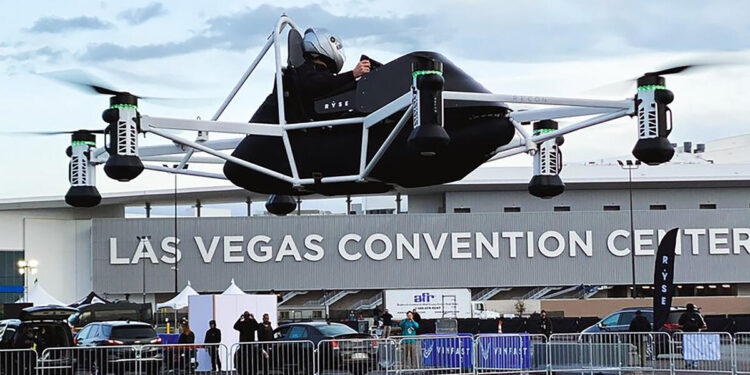 The company is conducting daily demonstration flights outside the convention this week with its ultralight, single-seat eVTOL aircraft, called Recon. Erik Stephansen, Ryse’s director of regulatory affairs and aerodynamics, is piloting the aircraft during the demonstrations, which are taking place in West Plaza outside the Las Vegas Convention Center. Stephansen was also the first person to conduct test flights with the Recon in the summer of 2022.

“As the world’s largest innovation stage, CES provides an unparalleled opportunity to showcase the Recon’s cutting-edge technology,” Stephansen said. “It’s a fantastic honor to be the first person to fly an eVOTL vehicle here at CES. I’m excited to conduct daily flight demonstrations at the West Hall’s outside demonstration area, giving attendees a chance to see firsthand how easy and intuitive the Recon is to operate.”

While most eVTOL companies are focused on urban air mobility solutions, such as air taxi services and cargo transportation, the Ryse Recon eVTOL aircraft is more of a utility vehicle intended to be used by private farmers and ranchers. The simple aircraft would allow such agricultural workers to quickly and easily conduct land surveillance, keep an eye on livestock and crops, and access hard-to-reach places without the need for ground vehicles, which can cause soil impaction and other damage when driven on land.

Because the aircraft falls under the FAA’s Part 103 rules for ultralight recreational aircraft, which do not require type certification, operators don’t need to be licensed pilots. The company describes its aircraft as an all-electric “aerial ATV,” or a flying version of what’s commonly known as a four-wheeler, a single-seat ground vehicle that also requires no license to operate. However, there are some limitations on when, where, and how Recon owners can fly the vehicle. For example, it’s allowed to fly only during the daytime in good weather, and its payload can’t exceed 255 pounds (116 kilograms).

The Recon has six battery-powered propellers and a top speed of about 63 mph (100 km/h) and can reach altitudes of up to 400 feet (120 meters). Its batteries take less than 90 minutes to fully recharge, and it can fly for about 25 minutes on a single charge. Ryse has said it plans to start delivering the $150,000 aircraft to customers in the fourth quarter of 2023. The Recon is available for preorder at the company’s website.

Honda and Sony Team Up to Launch New EV Brand