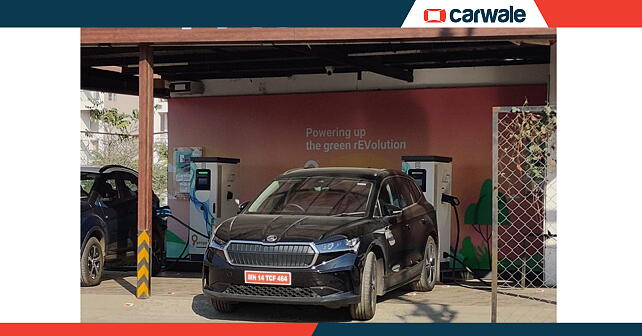 
– The Skoda Enyaq and Volkswagen ID.4 are being evaluated for India

Earlier this month, Skoda Auto Volkswagen India Group confirmed that it is evaluating future products for India, including the ID.4 and the Enyaq. While the latter was recently spotted testing across the country, new spy shots give us a fresh peek at the Enyaq EV.

The Skoda Enyaq was a completely uncamouflaged test mule that was seen around Pune as it stopped at an EV charging station for a quick recharge. Based on the brand’s MEB platform, we expect the Skoda Enyaq and Volkswagen ID.4 to be introduced in the second half of 2023.

Notable elements visible from the spy shots of the Skoda Enyaq include a closed-off grille with a chrome surround, a new front bumper with air curtains on either side, a wide air dam, front door-mounted ORVMs, roof rails, dual-tone aero wheels, and a chrome window line. The posterior is expected to feature an integrated spoiler with a high-mounted stop lamp, a shark-fin antenna, Skoda lettering and a number plate recess on the boot lid, a dual-tone bumper with reflectors, rear wiper and washer, and wraparound LED tail lights.

Inside, the Skoda Enyaq EV is expected to come equipped with a floating touchscreen infotainment system, a fully digital instrument cluster, a three-spoke steering wheel, an all-black interior theme, a panoramic sunroof, three-zone climate control, and powered front seats. The model could be powered by a 77kWh battery pack with dual motors developing a combined output of 265bhp.