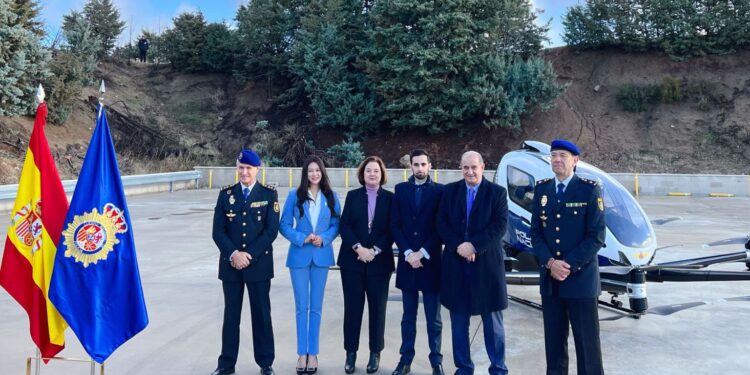 
The Spanish National Police (SNP) have officially started trial operations with the Ehang EH216 autonomous electric vertical take-off and landing (eVTOL) vehicle. SNP and China-based autonomous aerial vehicle (AAV) company EHang announced the collaboration in Oct. 2021, stating that they would be exploring how to best use AAV technology in emergency and security missions through trial flights and use case analysis. The EH216 is being considered for tasks such as “accessing contaminated areas with nuclear, radiological, bacteriological or chemical risks, landing in confined areas, aerial logistics, and other police services[…]”

“The SNP is the first security institution in the European Union to operate an AAV,” said Spain’s Secretary of State for Security Rafael Pérez. “Unmanned aircraft systems (UAS) constitute an alternative technological asset for multiple purposes, such as deployment in dangerous areas following a natural disaster or an accident, without endangering human lives. The lower operating costs of UAS and their constant new applications show great advantages over traditional aerial means.”

Ehang’s EH216 AAV has reportedly completed more than 30,000 test flights with its first public passenger flights taking place in Vienna, Austria, in April 2019. The aircraft has a range of 30 km (16 NM), top speed of 130 km/h (70 knots) and payload capacity of 220 kg (485 pounds). As previously reported by AVweb, the Civil Aviation Administration of China (CAAC) established a type certification team for the EH216 in April 2021 and certification activities are ongoing.

Should vehicles parked at EV charging stations that are not plugged in be ticketed and/or towed? – Poll

Tesla's 2022 Stock Plunge Is Worth Most Automakers Combined