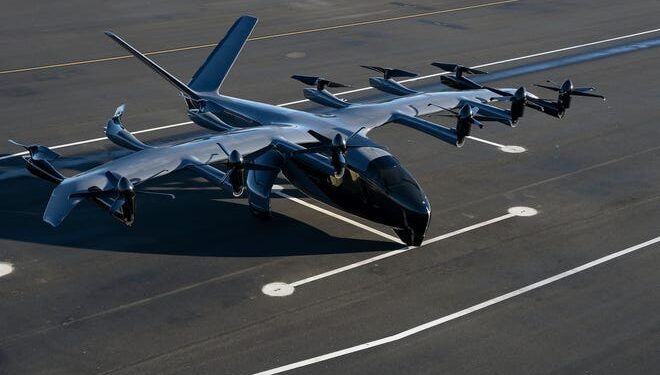 
Las Vegas — If Jeep SUV and Ram pickup truck owners think their vehicles are fly, wait until they see the latest vehicle the automaker has announced it’ll build.

Expanding its partnership with California-based startup Archer Aviation Inc., Stellantis NV said on Wednesday it’ll manufacture Archer’s Midnight, an electric vertical take off and landing, or eVTOL, aircraft designed to launch for the creation of an urban air taxi and mobility network. The automaker will help to start up the manufacturing plant Archer has announced outside Atlanta in Covington, Georgia — marking yet another instance of next-generation technology slated for production by one of the Detroit Three automakers in the South.

Production is expected to launch in 2024.

The goal is for Stellantis to be the exclusive contract manufacturer of Midnight. The agreement is a collaboration seeking to leverage both partners’ strengths. Archer brings its expertise in the development of eVTOLs, electric powertrains and certifications, while Stellantis offers its long history of knowledge and capability in mass manufacturing in a highly regulated sector. It also has opened its pocketbook for the project, committing to provide up to $150 million in equity capital for potential draw by Archer at its discretion in 2023 and 2024 so long as it achieves certain milestones that Archer expects to occur this year.

The agreement could position Archer to be the first eVTOL to market, Archer CEO Adam Goldstein said in a statement: “Our two companies are taking these important steps together to realize a once-in-a-generation opportunity to redefine urban transportation.”

Unveiled in November, the Midnight is an aircraft that can carry a pilot and up to four passengers. It launches and lands more like a helicopter than a plane. The Midnight has a range of 100 miles, according to Archer, and was designed for back-to-back short distance trips of around 20 miles with a charging time of 10 minutes in-between. It is capable of carrying more than 1,000 pounds and can travel at speeds up to 150 mph.

Archer in November chose E-One Moli Energy Corp., a Taiwanese manufacturer that does business as Molicel, as the supplier of aircraft’s lithium-ion batteries. Molicel has planned its fist battery plant with 1.8 gigawatt-hours of annual capacity to launch this year in its homeland.

Since 2020, Fiat Chrysler Automobiles NV, which became Stellantis following its 2021 merger with French automaker Groupe PSA, has offered its expertise in manufacturing, supply chain and design to Archer as a strategic partner. It became an investor last year through its $328 million Stellantis Ventures arm. Stellantis intends to increase its shareholding in Archer through future purchases of publicly traded Archer stock on the New York Stock Exchange.

“Deepening our partnership with Archer as a strategic investor with plans for growing our shareholding demonstrates how Stellantis is pushing the boundaries to provide sustainable freedom of mobility, from the road to the sky,” Stellantis CEO Carlos Tavares said in a statement. “Supporting Archer with our manufacturing expertise is another example of how Stellantis will lead the way the world moves.”

Although eVTOLs once were thought of as vehicles of the future, it’s actually the first production all-electric vehicle that Stellantis will build in North America to be unveiled. The first traditional EV Stellantis will launch here will be the all-electric ProMaster commercial late this year in Saltillo, Mexico. An array of fully electric vehicles will come in 2024, from the Ram 1500 pickup truck, whose concept is set to debut Thursday at the CES consumer electronics trade show in Las Vegas, to the two-door Dodge Charger muscle car to the Wrangler-inspired Jeep Recon SUV and the smaller Wagoneer — codenamed “S” until a name is chosen from enthusiast submissions.

Tavares has pointed to the Archer partnership as an example of the company’s offensive moves in EV development around lightweight, fast-charging batteries and better energy management systems. Such technologies could help to increase range and address consumer concerns with EVs.

The 96-acre site in Georgia is adjacent to the Covington Municipal Airport. Archer’s initial plans are to build a 350,000-square-foot plant able to produce up to 650 aircraft per year, though it could be expanded by an additional 550,000 square feet to support the production of up to 2,300 aircraft annually. The expected $118 million investment over the next 10 years is expected to create more than 1,000 jobs.

Georgia is supporting the projects with an incentive packaging representing 33% of the capital investment commitment, including land conveyance, tax incentives and a grant.

Archer is working to certify Midnight with the Federal Aviation Administration in late 2024. It hopes to create an urban air mobility network to launch in 2026. It has announced with United Airlines Inc. its first commercial air taxi route will be between New Jersey’s Newark Liberty International Airport and the Downtown Manhattan Heliport above Battery Park on Pier 6. United in August also gave Archer a $10 million pre-delivery payment for 100 of the production eVTOLs.