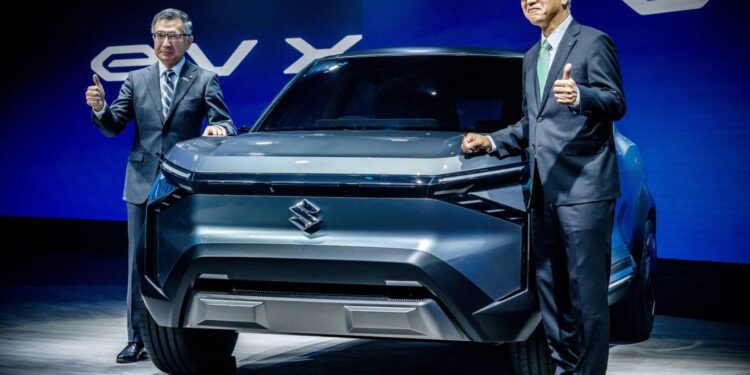 Suzuki said it is learning EV and other technology from Toyota with a goal to develop cars that are more in line with its own products.

“So, how to introduce this EV technology on small cars is something we need to work upon and share with Toyota,” he said on the sidelines of India’s biennial car show on Wednesday.

After a slow start to EVs, Toyota — which has a 4.89 per cent stake in Suzuki ― is considering a reboot of its electric car strategy given the rise in popularity of Tesla’s cars.

The Japanese car maker previously assumed demand for EVs would not take off for several decades, Reuters reported last year.

When asked if it would consider launching EVs built on gasoline engine platforms, Suzuki said it needed to develop an EV from scratch.

India’s EV market has gained momentum. Tata Motors, which dominates electric car sales in the country, as well as foreign players Saic, Mercedes Benz and Stellantis have lined up launches.

With planned investments of up to $1.3 billion to make EVs and batteries locally, Suzuki is pushing deeper into India, which is set to become an EV centre for the Japanese car maker.

Suzuki is the majority owner of Maruti, which has faced growing competition from rivals as buyers shift to bigger cars such as SUVs and regulators demand safer and greener cars, increasing costs.

“One of the reasons we could not sustain 50 per cent market share … there was a delay in launching SUVs at our end,” Suzuki president Toshihiro Suzuki said.

The company is trying to recover its market share by launching more SUVs, he said.

“We see potential of long-term growth in the small car segment. We have to make effort for deeper penetration and further spread the sale of compact and small cars in India,” he said.

Maruti dominates car sales in India with its small, cheaper vehicles, making the South Asian nation one of the most important markets for the Japanese company.

India contributes 50 per cent to 60 per cent in revenue to Suzuki and this ratio is expected to increase in the future, the car maker said at the event held on the outskirts of the capital city, New Delhi.

Autopilot Gets Better And Better

What Is Canada's Project Arrow?

Is this electric passenger plane the future of fossil-free flying?