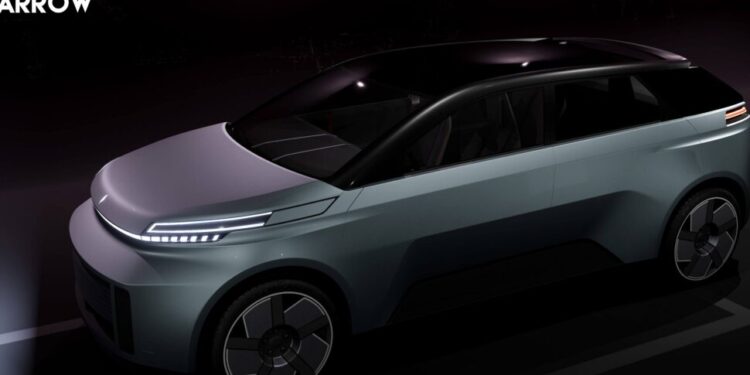 Cars are designed and built all over the world, but one doesn’t tend to think of Canada as the focus of automotive manufacturing, electric or otherwise. And while several major car manufacturers, including the likes of Stellantis and GM, are investing in Canadian EV production, there has not been an all-Canadian EV – until now. Project Arrow, an all-Canadian effort, unveiled its electric prototype at the Consumer Electronics Show (CES) in Las Vegas last week.

What is Project Arrow? The Automotive Parts Manufacturers’ Association (APMA) of Canada launched the first, original, full-build, zero-emission concept vehicle in response to Prime Minister Justin Trudeau’s call for a Zero-Emissions future by 2050. Canada has joined over 120 countries in committing to net-zero emissions by 2050, including all other G7 nations. This is not just a goal for Canada, it’s the law. The Canadian Net-Zero Emissions Accountability Act is legislation that ensures Canada’s commitment to achieving net-zero emissions by 2050.

The goal of Project Arrow is twofold: to showcase Canadian automotive design, engineering and manufacturing expertise in the age of EVs, and to inspire home-grown talent and capital to keep innovating. Project Arrow has been designed, engineered and built through the joint efforts of the Canadian automotive supply sector and post-secondary institutions. The concept vehicle unveiled at CES is the biggest industrial collaboration project in Canadian automotive history, with 58 Canadian companies contributing to it. The project received $8.2 million in combined funding from the federal and provincial governments.

It is unclear whether Project Arrow will actually go into production or not, and if it does, will it be sold globally? According to Project Arrow, the vehicle is intended for Canadian drivers, but the fact that it was introduced at CES and is now going on a two-year tour to auto shows around the world suggests otherwise. Or perhaps Canada just wants to show it off, and who can blame them? Welcome to the world of EVs, Canada – with innovation comes an easier path to that zero-emissions future.

The Window to Capture a $7,500 Electric-Vehicle Tax Credit May Be Closing. How to Snag It.