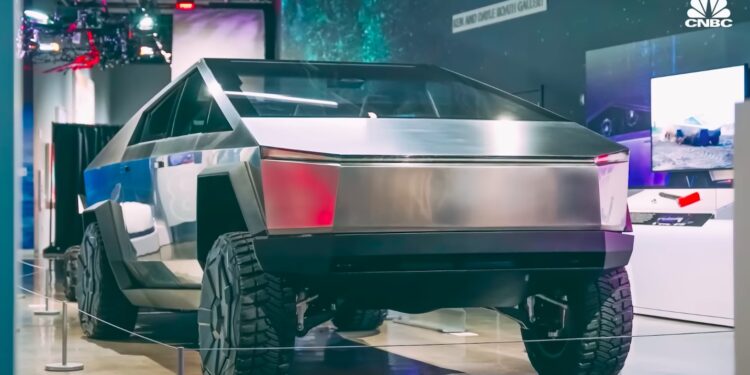 
The Tesla Cybertruck is finalized and nearing production over three years after CEO Elon Musk unveiled it, the company’s Chief Vehicle Designer Franz von Holzhausen said on a podcast.

The Tesla Cybertruck, after being unveiled in 2019, has been delayed on several occasions due to the global COVID-19 pandemic and related supply chain issues. While Musk has indicated on several occasions that the design is finalized, Tesla has continued to make slight adjustments while it prepares for early production, which is slated for mid-2023. Volume production is set for the end of the year.

While the Cybertruck project has been delayed, it appears Tesla is finally getting very close to production, the automaker’s Chief Vehicle Designer Franz von Holzhausen said on the Ride the Lightning podcast with Ryan McCaffrey.

After McCaffrey asked whether the Cybertruck was finished “from a design perspective,” von Holzhausen answered, “Yeah. Basically, yes.”

McCaffrey also mentioned that production was slated for less than six months from now, and the Tesla Chief Designer did not deny nor indicate that anything would hold up the initial manufacturing phases.

However, von Holzhausen did say that Tesla never has a “pencils down” mentality with vehicle design, and Tesla remains fluid with its ideas. If the vehicle could be improved upon or if the company decides to make changes, it will not refrain from doing so.

“We work consistently through the entire process, and we’re constantly working on every detail,” he said, “and the refinement of that. So, and we learn things through the engineering phases and the manufacturing development phases that we can improve on, and so we do.”

He was sure to include that the Cybertruck has features that customers do not know about yet, but in typical Tesla fashion, no details were shared.

One of the more interesting tidbits of the interview was when von Holzhausen confirmed Tesla was looking at adding Yoke steering as a standard option on the Cybertruck. While prototypes have been spotted with the Yoke steering, Tesla has not yet confirmed whether it will commit to that for the vehicle. However, von Holzhausen said it “makes sense.”

Tesla recently made Yoke steering optional in the Model S and Model X, giving customers the option to choose a traditional steering wheel instead of the polarizing Yoke selection.

Tesla has made plenty of strides in Cybertruck production over the past few months, including delivering IDRA Giga Press machinery at Gigafactory Texas, where the vehicle will be built. Tesla will utilize a 9,000-ton Giga Press from IDRA for Cybertruck manufacturing, which may have arrived at the Texas factory earlier this month.

Aiways Thailand plans its own factory