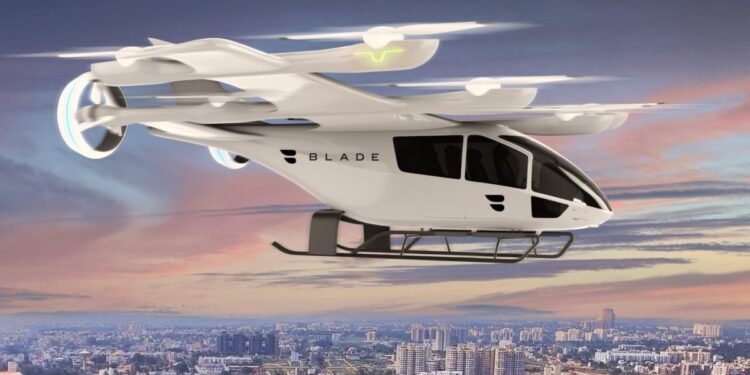 The partnership is designed to assist BLADE India’s preparation for planned UAM services like air taxi flights in the country, with Eve providing eVTOL craft, operating systems, and navigation and air traffic management platforms. As the pair works to ready BLADE India’s future activities, Eve says information and insight it gains from their efforts will be integrated into its own development of next-generation planes and support systems.

As part of their linkup, Eve and Blade India intend on operating a three-month simulated UAM transport project using helicopters to simultaneously test routes and potential vertiport locations, while providing clients and the public an idea of what air taxi services will be like once eVTOL craft come on line.

That preview-offering pilot program plays into the strengths of BLADE India’s parent company, Blade Air Mobility, which is expanding its short-hop helicopter and amphibious plane transportation services into UAM, using Eve eVTOLs and ground tech to do so. As their partnership progresses, BLADE India plans to work toward what it initially foresees will be 50,000 hours of annual flight time using Eve assets.

The subcontinent is considered a potentially ripe market for future air taxi and other services promising to lift passengers over the notoriously clogged streets of India’s cities and quickly transport them to desired destinations. The nation’s serious ground traffic problem is likely to worsen still as fast and powerful economic development gives an ever-greater number of people the means to buy cars.

“India’s traffic congestion woes are only expected to get worse,” said BLADE India managing director Amit Dutta. “This partnership allows us to leverage Eve’s deep expertise in not just (eVTOL) design but also in the infrastructure required to support UAM.”

The accord with Blade India adds additional momentum to Eve’s recent acceleration of its UAM business development, including a $15 million cash infusion last month by United Airlines and an accompanying order of 200 eVTOL planes.

“We are thrilled about partnering with BLADE India and pioneering the urban air mobility market in the country, which has the potential to be one of the largest markets globally,” said Eve co-CEO André Stein. “This initial order will allow us to enter into service in India and further develop the ecosystem according to the community’s needs. We look forward to offering the people of India a zero-emission UAM solution in the future that will be quiet, efficient, and accessible.”