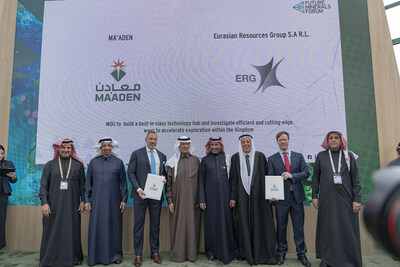 
RIYADH, Saudi Arabia, Jan. 13, 2023 /PRNewswire/ — The first day of the second ever FMF, hosted by the Ministry of Industry and Mineral Resources, under the auspices of the Custodian of the Two Holy Mosques, King Salman bin Abdulaziz, witnessed the exchange ceremony of 25 co-operation agreements, JV’s and Memoranda of Understanding between a number of government agencies, companies and institutions participating in the conference.

These agreements and Memoranda of Understanding covered mineral exploration, technology and communications, the application of sustainability standards, localization and rehabilitation, and industrialization in the minerals sector. The signing ceremony also witnessed the handing over of the two exploration licenses for the Khnaiguiyahand Umm Ad Damar sites to the companies that won their licenses.

Among the most prominent local entities participating in the signing ceremony were the Ministry of Energy; the Ministry of Industry and Mineral Resources; the Saudi Geological Survey;  Ma’aden; the Saline Water Conversion Corporation; King Abdulaziz City for Science and Technology, King Saud University; the Royal Commission of Jubail and Yanbu; Saudi Aramco; King Fahd University of Petroleum and Minerals; the Federation of Saudi Chambers, and the Saudi National Industrial Development Center.

Over the course of two days, the conference will witness a discussion on a number of pressing issues in the mining sector, which include global economic and environmental developments affecting the mineral industry in the region; the theme of environmental and social practices in terms of competition and equal opportunities across the value chain to achieve economic prosperity, and the Kingdom’s leadership in the supply of renewable energy over the next ten years. FMF continues to concentrate on how to bridge the gap between demand and supply.