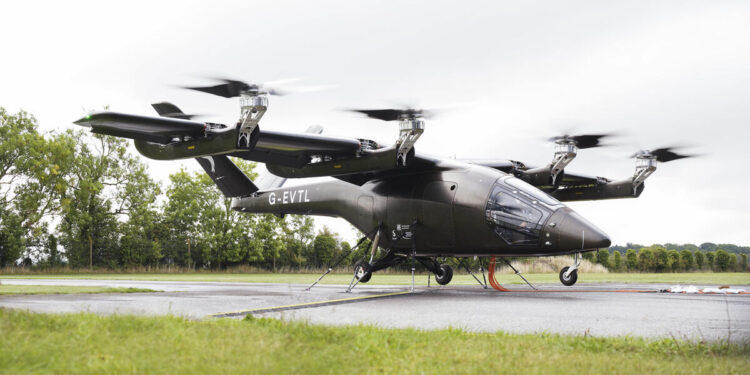 
Vertical Aerospace is gradually stepping up flight testing of its VX4 eVTOL aircraft prototype as it seeks to progress from tethered takeoffs to low-speed flight before making a full transition from hover to wing-borne operations. The UK company has not disclosed a detailed timeline for these steps toward type certification and service entry in 2025, but a letter to shareholders on November 9 provided details about the flight test program, which started with a first hover on September 24.

Having conducted the first tethered takeoffs inside a hangar, the Vertical team has since moved the aircraft outside at Kemble Airport in southwest England. The letter summarizing third-quarter financial results stated that 14 piloted test flights had been made since the company received its permit to fly from the UK Civil Aviation Authority.

Testing conducted so far has used an active front-end 1MW DC ground power source to gradually increase thrust to 1,000 rpm to establish a lift thrust of between 800 and 850 rpm. Rolls-Royce is developing the VA-X4’s electric propulsion system (EPU), with TE Connectivity supplying electrical cables and connectors.

Vertical has not said whether the aircraft has yet been fitted with an onboard propulsion system and when untethered flights might start. In May, Rolls-Royce Electrical’s customer director, Mathieu Parr, told FutureFlight that the new EPU will initially be used as part of Vertical’s iron bird ground test bench and be ready for flight testing in a prototype by the end of 2023.

Vertical told shareholders that before the first tethered flight, it had to meet 167 test conditions. This involved running the aircraft’s eight propellers for five and a half hours and capturing more than two terabytes of data over 450,000 parameters.

The company says its eVTOL vehicle will be exceptionally quiet due to having low tip speeds of around Mach 0.4. To achieve these, it is using wide propeller blades that have been shaped to optimize the thrust required for vertical takeoff and landing without increasing noise.

Vertical reported an operating loss of £18.6 million ($21.2 million) for the third quarter of this year and said that its investments over the first nine months of 2022 have totaled £58.1 million. According to CFO Vinny Casey, its total capital spending this year is expected to come to around £80 million, which he said is at the lower end of projections.

To bolster its balance sheet, Vertical says, it has accessed some funds through the $100 million equity subscription line it established with new investor Nomura Securities in August. Casey explained that the strength of the U.S. dollar on currency exchanges has proved beneficial since most of its costs are in the historically weak British pound. The company says it holds sales commitments for more than 1,400 aircraft from a dozen customers.

Initially, Vertical aims to get the VX4 certified by the UK Civil Aviation Authority. The European Union Aviation Safety Agency is expected to validate this type certificate.