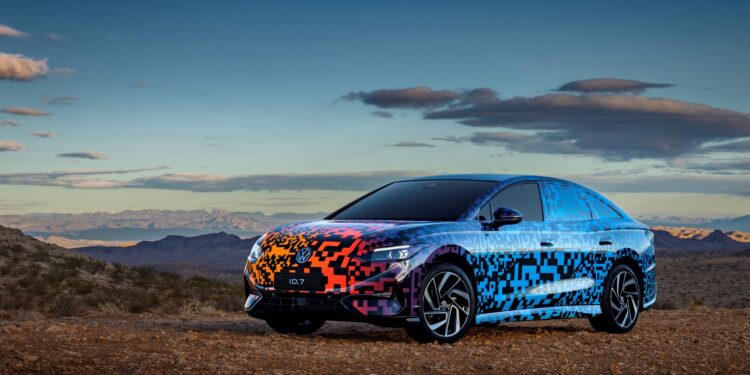 
Volkswagen has revealed ID.7 as the name for the next model in its ID electric-vehicle family, and this week at CES in Las Vegas it’s showing a “digital camouflage” prototype of the ID.7 ahead of a production-bound reveal later this year.

Based on the ID.Aero concept car that VW had already confirmed was U.S.-bound, the ID.7 is a large sedan with a tapered, coupe-like roof and an emphasis on aerodynamics. At 194.5 inches long, it’s about the length of a Tesla Model S and built on a long 116.9-inch wheelbase. But with a height of 60.2 inches, it’s a bit taller than most other existing sedans, electric or not—so as to fit a spacious cabin above the battery pack.

Volkswagen released no information about the ID.7 concept’s technical specs, but it’s built on Volkswagen’s MEB platform that already underpins the ID.4 as well as several other models offered in China and Europe.

In the Aero, it may in its longest-wheelbase form—like the upcoming ID.Buzz—offer a battery pack with roughly 90 kwh of usable energy, promises “a range of up to approximately 700 kilometers.” That’s on the European WLTP cycle; VW isn’t yet willing to suggest what that will amount to on the EPA cycle, but we suspect that it will mean in the vicinity of 350 miles in at least one version. VW hasn’t even yet confirmed the drive configuration, although we expect both rear-motor and dual-motor versions.

While this special version for CES may closely resemble the production car, it may actually be a bit challenging to see some of the up-close contouring details of the ID.7 in a proper light. In addition to being presented in “smart camouflage,” the concept wears 40-layer pearlescent paintwork that creates its own light and depth effects on the vehicle’s surfacing—through actual electroluminescent layers that are conductive and can be electrified to emphasized

Beyond the cloaked interior, VW previews what appears to be a not-too-distant interface upgrade inside the ID.7. A “new display concept” ups the touchscreen to 15.0 inches, brings in illuminated touch slides, and adds an augmented reality head-up display. Air conditioning controls are now integrated into the top level of the infotainment interface, and an intelligent vent system can preemptively heat or cool the vehicle, detecting when the driver approaches.

The production-bound ID.7 is due to be sold in China, Europe, and America, and it will go on sale in the U.S. in 2024. Volkswagen says that the ID.7 will be produced at its Emden, Germany, plant starting in