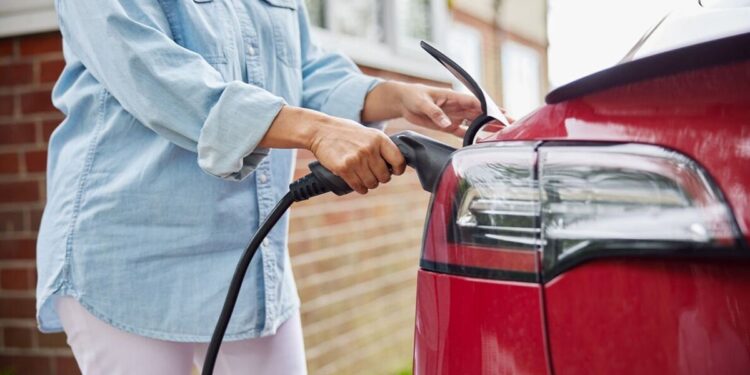 
Dwindling Government income from car sales may mean the introduction of further taxes on electric vehicles (EV) in 2023, according to a world leading expert. It was announced this week that sales of electric cars had surpassed those of diesel models for the first time in the UK.

This was partly due to global supply chain disruption and a drop in overall car sales, as UK carmakers continue to recover from the aftermath of the pandemic.

However, Professor ManMohan Sodhi from Bayes Business School claimed these trends may not hold for the long term.

He also highlighted possible Government intervention in the form of further taxes for EVs or slowing down the planned expansion of EV charging points.

Professor Sodhi said: “That fact is that the Government is receiving continually reduced revenues from car sales.

READ MORE: Cyclists warned of Highway Code rule that could lead to £2,500 fines

EV sales rose by more than a quarter in 2022 to total more than 16 percent of all sales, while diesel demand fell to less than 10 percent.

However, the number of diesel cars sold may still be slightly more as the price of a typical electric car sold in the UK can be 1.7 times that of a diesel car.

Professor Sodhi added that he expects the number of people investing in either electric or hybrid models will increase, as competition leads to lower prices, although a lack of charging points may continue to be a barrier to those who are considering investing in a plug-in vehicle.

He said: “Another trend is the move towards electric and hybrid cars, whether true hybrid or plug-in.

READ MORE: UK drivers warned of fines for driving a petrol or diesel car in Spain

Petrol cars remained the most popular option for UK buyers last year, accounting for more than half of all sales, but more in the number of cars sold.

Hybrid models accounted for 11.6 percent of the market and plug-in hybrids that can recharge were 6.3 per cent.

While 2022 was the worst sales year for UK carmakers since 1992, Professor Sodhi said these percentages will change this year, although which direction they go in is another question.

He added: “As people in the UK will buy more cars in 2023 and 2024, it is anyone’s guess whether it will be pure electric cars or true/plug-in hybrids that will grab people’s attention as they are attracted to electric cars but have to hedge against charging constraints that will continue.”

A Government spokesperson told Express.co.uk: “The Government will continue to incentivise the uptake of zero-emissions vehicles through a range of tax measures and purchase subsidies and are already providing over £1.6billion to support the continued roll-out of chargepoints, including £450 million through our Local Electric Vehicle Infrastructure Fund for local authorities.

“We are also encouraging councils to make use of our £20million On-Street Residential Chargepoint Scheme to support the rollout of public chargepoints in residential areas.”

Are U.S. Cities Ready For A Surge In Electric Cars? – Cheddar Explains