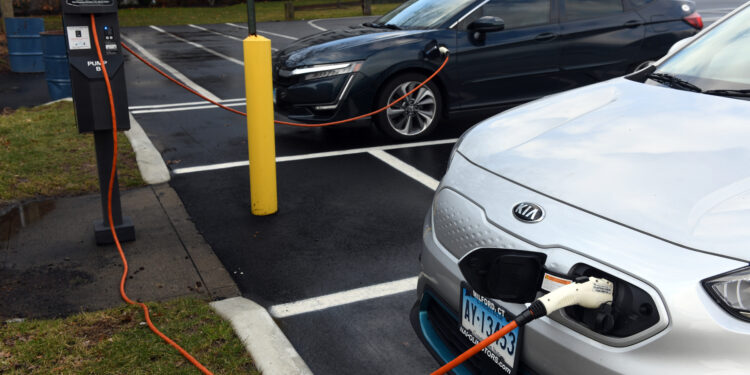 MILFORD — Any future developments with 30 or more parking spaces will have to make 10 percent of those spots electric vehicle charging capable, thanks to a newly approved change to the city’s zoning regulations.

“The future is here,” City Planner David Sulkis told members of the Planning and Zoning Board at its meeting Tuesday, during which the board approved the new rule. The regulation change will affect any developments after Tuesday’s vote.

The state legislature, in Public Act 22-25, mandated towns to have regulations for accommodating electric vehicles charging on projects where there are 30 or more parking spaces.

“So if a developer is building something and it’s got 30 parking spaces, the statute says that 10 percent of the parking should have electric car charging stations,” he said. “If you approve this tonight, we have other projects in the pipeline that haven’t submitted formal applications. They are going to be required to follow it.”

Sulkis said he has noticed that many large projects, either existing or being built, even up to last year, often have some level of electric vehicle charging stations included.

Metro Star Properties is one of those developers that will be affected by the regulation change at its Beaver Brook Apartment project. The proposal for the 189-unit apartment complex includes 268 parking spaces.

“We have been anticipating this pending regulation from the time we started working on our modifications to the approved Beaver Brook project, and as such, we had charging stations in our parking plan from the beginning of the design process,” said Blake Smith, Metro Star Properties director of development.

Smith said the company has built projects with charging stations before, and thus has experience with the,

“We have incorporated these stations in a way I believe is convenient and seamless,” he said. “We are a relatively diverse lot, but I can say that Metro Star welcomes legislation that is future-focused.”

Smith said the requirement for EV charging would have a twofold effect on future developments.

“They cost money, and they displace available parking,” he said. “The former is alleviated, in some part, by the profit share the charging companies agree to with the developer. The latter is simply a matter of considering this new factor when designing.”

David Marasow, developing the 14 live-work units on Oxford Road, said it’s “no harm no foul” as long as there remain incentives to install them.

“The issue is once developers need to pay out of pocket, 10 percent adds up quickly, and these chargers ain’t cheap,” he said. “With construction costs already extremely high, and rents starting to flatten out or even start coming down, you’re going to slow development down.”

According to the Alternative Fuels Data Center, Milford has seven locations available for electric vehicle charging.

Some locations include the Connecticut Post Mall, which has six public EV chargers and 14 Tesla Superchargers; Hilton Garden Inn Milford has four public EV chargers. On city-owned property, there are six — two at the public library, two at Parsons Government Center and two at the train station.

Two more chargers should be coming online in the coming months, with the Woodruff Family YMCA installing them in its parking lot.

“We will be adding two electric car charging stations in the Spring of 2023,” said Donna Gill Lisitano, marketing and communications director of Central Connecticut Coast YMCA.

Lisitano said the regional YMCA, which includes Milford, has a long-term real-time strategic plan to reduce its carbon footprint and help the environment.

“All of us at the Woodruff Family Y are excited to offer this new benefit to our members and those in our community,” she said.

“We have a proposal that will be finalized soon with some more installations in Milford that we will take the lead on,” he said. “We must ensure that we have enough because as the years roll on, more electric vehicles will be used.”

Why No One Will Miss The Discontinued Chevrolet Spark

Go Underground in These Berlin Tours Filled with History