Your Guide to the ChargePoint Charging Network 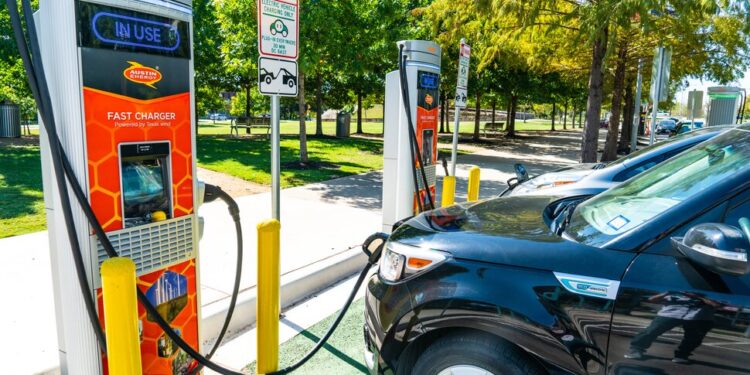 
What Is the ChargePoint EV Charging Network?

ChargePoint was founded in 2007 – a year before the Tesla Roadster was available for purchase. The network is not affiliated with any other company, and it is devoted solely to electric vehicle charging, including private cars, fleets, buses and other public vehicles in North America and Europe (so far). As part of its network, it provides 70% of the networked Level 2 chargers in North America.

Most of the network uses Level 2 chargers, but about 15,000 of those ports are DC fast charging ports.

How Many ChargePoint EV Charging Stations Are in the U.S.?

Not surprisingly, many of ChargePoint’s stations are in California, with more than 4,000 chargers in the San Francisco Bay area alone. There’s another cluster of chargers stretching from Boston to Washington, DC, a high-density area for population and EV adoption. Most large American cities have hundreds if not thousands of public ChargePoint stations, including Chicago, Miami, Denver, Salt Lake City and Seattle.

Demographics and EV adoption play into locations as much as sheer population size. For instance, there are more ChargePoint ports in Austin, TX, than there are in Dallas or Houston. But there are chargers spread across the country, even in less populated areas of the American west. These tend to be located along US highways.

How Do You Find a ChargePoint EV Charging Station?

The easiest way to find a ChargePoint station is to use the network’s app. You can search by station location, price, charging speed, plug type, and charging network, since ChargePoint’s app is compatible with roaming.

The app integrates with Waze, Google Maps and Apple Maps to navigate you to the station you choose.

How Do You Use a ChargePoint EV Charging Station?

Most drivers will start by opening the ChargePoint app. To start your charging session, tap your phone (with the app open) on the station or push the orange Start Charge button within the app. If you don’t have the app handy or your phone has died, there’s a ChargePoint access card with an RFID chip that can start the charge by tapping it on the station too.

ChargePoint will send you a receipt via email, and your charging history is saved in the app.

ChargePoint offers a few different charging speeds, and you can search according to your current needs and the charging speed that your car supports.

The network’s Level 2 stations charge up to a rate of 22 kWh. ChargePoint Express ports delivers up to 125 kWh. The most advanced electric vehicles can take advantage of the ChargePoint Express Plus stations, which charge at rates up to 350 kWh, depending on the station’s configuration.

Remember that these numbers are limited in part by how fast each car can charge. Though most cars come with the ability for DC fast charging, some models aren’t equipped to accept a charge this fast.

How Much Does it Cost to Use a ChargePoint Charging Station?

ChargePoint provides the chargers and maintains the network, but it allows the independent owners of the stations to set the prices. This is why it’s important to check the prices on the app when searching for a station. You’ll want to compare stations, which many people do for gas stations as well.

The prices will likely be based on local electricity rates, but owners have a lot of leeway with pricing. In areas that are trying to encourage EV adoption, some stations will have discounted or even free charging available. This is often the case in places where the owner of the station expects you’ll come inside their store and spend money, say at a mall or a grocery store.

How Do You Pay at a ChargePoint Charging Station?

You’ll pay for charging at a ChargePoint station via its app. You provide your payment information within the app before your first charge at a station. When you begin your first EV charge, $10 will be charged to your account to keep as a balance.

Anytime you use a station that requires payment, you’ll be charged using the information you entered into the app. If you only charge at home or use free stations, you will not be charged further fees after that initial $10 balance.

Does ChargePoint Support Plug and Charge?

ChargePoint does not participate in the Plug and Charge protocol, which automatically recognizes your vehicle and charging network. However, ChargePoint does allow very generous roaming, thanks to partnerships with other networks. The idea is that any driver may use any station via any network system.

When Should You Use a ChargePoint Charging Station?

Most EV charging is done at home, either with a standard outlet or a Level 2 in-home charging unit. But sometimes drivers venture far enough from home that they need a top-up, and that’s where public charging comes in.

You may want to stop for a quick charge at a roadside charging station while on a road trip, or you might use one near your hotel during a weekend away. Depending on your commute, you could use a public station at or near your workplace to top up before heading home. But with ranges of most EVs being well over 200 miles these days, it would have to be a heck of a commute.

Is the ChargePoint Network Better Than Rival Fast-Charging Networks?

The ChargePoint network is by far the largest charging network in North America. That goes a long way for peace of mind, especially for EV drivers with a little lingering range anxiety. Its latest 250-kWh fast chargers are as powerful as Tesla’s fastest Superchargers, but Electrify America boasts Hyper-Fast 350-kWh charging.

Electrify America has focused on fast charging, with more than 3,400 public DCFC ports available, but only about 100 Level 2 ports on the network. ChargePoint has more of both speeds available with its network.

EV sales surged in 2022. Which carmakers came out on top?

Tesla Falls to a Session Low