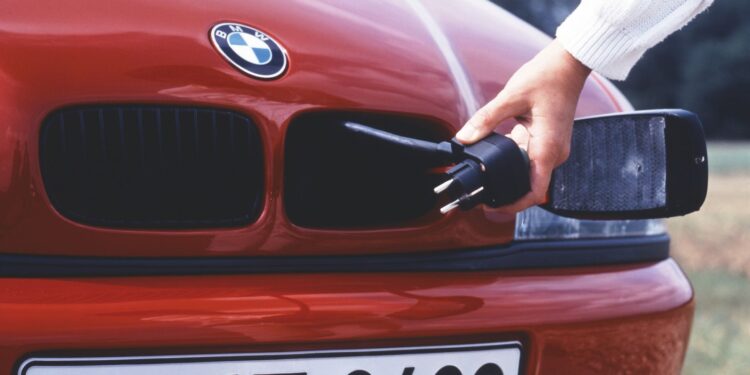 
Tesla has revolutionized the mainstream EV market. You can argue that if it weren’t for Tesla, and specifically it’s Model 3, EV technology wouldn’t be as widespread as it is now.

Other vehicle manufacturers seemed to lag behind in EV development until Tesla came along and put their feet to the fire. But, there have been many influential EVs in automotive history that came before Tesla, which is something that may surprise a lot of people.

The GM EV1 might not look like much today, but in its heyday, it was an engineering marvel that was way ahead of its time. The EV1 started life as the Impact concept car and later became a full-fledged production model.

GM’s electric two-seater was extremely advanced, featuring technology in 1996 that has only recently become commonplace across the automotive landscape. This quirky car was extremely aerodynamic (essential due to the battery’s limited range at the time), and it boasted a .19 Cd, which is mightily impressive.

The EV1’s range was limited by its Lead-Acid batteries, although later on, it was offered with NiMH batteries that increased its range significantly. The EV1 also featured regenerative brakes, which was an extremely advanced tech at the time.

EV1s even had heat pumps, which are vital to increasing an EV’s range during the winter. Unfortunately, all of these advancements couldn’t save the EV1 project, and ultimately the vehicles were taken back by GM from the owners (all EV1s were leased), and most of them were crushed.

Yes, you heard that right; GM decided to crush most of these engineering marvels. One of the reasons was that GM couldn’t provide future parts support for the vehicle.

The entire debacle led to a documentary accusing GM of killing the electric car, which fueled conspiracy theories. Regardless, the EV1 will forever hold an important pioneering role in EV history.

When you consider EV pickup trucks, many people would immediately think that Rivian was the first manufacturer to bring one to market. But you’d be surprised to find out that the actual pioneer of the EV pickup truck space was actually General Motors.

The Chevy S10 EV popped onto the scene long before Rivian, in 1997, to be exact. The S10 launched around the same time as GM’s revolutionary EV1, but the S10 wasn’t the slick, aerodynamic wonder that the EV1 was.

It looked like any regular pickup truck, so the range was obviously nothing to write home about. Later, there was an option for a better battery that improved the range, but it wasn’t a truck you could take on a long road trip.

Today, we’re spoiled with amazing EV pickup trucks that can truly go the distance on a single charge. But, in the early years, GM was severely limited by battery tech that couldn’t deliver adequate range. Regardless, GM and its Chevy S10 EV were innovators in the EV pickup truck segment.

Electric SUVs seem to be the hottest vehicles on the road. Every car manufacturer either offers or is planning on offering an electric SUV. This is not surprising because SUVs generally tend to sell very well.

Before every major automaker decided that they needed an electrified SUV, there was the Toyota RAV4 EV of the late 1990s. It’s based on the most unsightly RAV4 generation, but the SUV is still a technological wonder that was way ahead of its time. The EPA’s Fuel Economy website rates the total range of a 2000 RAV4 EV as 88 miles.

Surprisingly, this isn’t a horrible number, especially when you consider this is an EV more than 20 years old. If you’re a city dweller, you can still use this EV as daily transport. It might not be the fastest vehicle around, but it’ll take you where you need to go.

This is another vintage electric vehicle that was severely limited by the available battery technology. However, it’s still amazing that EVs roamed the streets long before Tesla made its first car.

The BMW E1 was a revolutionary BMW concept car from the early 1990s. BMW made two versions of the concept, both with distinct styling. BMW’s current i3 electric hatchback clearly draws plenty of inspiration from the original tiny BMW electric vehicle.

Both the i3 and the original E1 are built following a lightweight philosophy, and the E1 features aluminum construction as well as a plastic-intensive body. These materials were used to keep weight down to counteract the heft introduced by the batteries.

With its 45-horsepower electric motor, the E1 wouldn’t likely be included in a current list of the best-performance EVs, but it was still an innovator during its time.

It also delivered on the range front, with around 150 miles of usable range. It’s almost unthinkable that an EV from this era could offer up so much range, especially considering the battery technology of the time.

Modern-day EV manufacturers should imitate the intensive effort by BMW to keep the weight down because excess weight is one of the major drawbacks of modern-day electric vehicles. The E1 looked amazing and surprisingly modern for its time. The side profile is also oddly reminiscent of a scaled-down Tesla Model X.

If you thought the other vehicles on this list were revolutionary at the time, they have nothing on the GM Sunraycer. This tadpole-looking vehicle was a racecar built by GM and AeroVironment to compete in a solar vehicle race across Australia in 1987.

Yes, you read that right, 1987. This is an EV from the 80s powered by a completely renewable energy source. The Sunraycer laid the groundwork for General Motors’ first electric vehicle, the aforementioned EV1.

AeroVironment, along with GM, were also responsible for the Impact prototype, which eventually gave birth to the EV1. The Sunraycer was immensely aerodynamic and energy efficient, with solar panels integrated neatly into the slippery bodywork.

This vehicle demonstrated that you could source power from the sun to propel a vehicle effectively.

But, solar tech in cars hasn’t taken the major leap many would have envisioned judging by the original Sunraycer in the 80s. Currently, there isn’t a production vehicle from a major company that runs solely on sunlight, and it’s a shame.

If automakers had gone all in on solar power from the inception of the GM Sunraycer, today’s vehicles would look a lot different.

Why Did EV Progress Stall?

All the vehicles mentioned here are amazing feats of engineering. But it’s frustrating to think about the amazing results that 30+ years of constant research and development in the EV field would have produced today.

It seems that many automakers dropped the ball after innovating with these amazing vehicles, leading to a period of stagnation in the development of EVs.